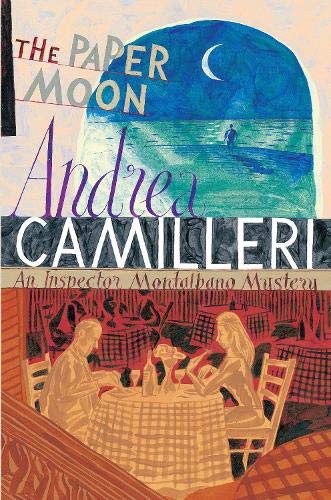 Paper Moon is the thrilling ninth instalment in the Inspector Montalbano series, by Italian author Andrea Camilleri. Motionless, Montalbano waited for the surf to enter his brain and wash it clean with each breaker. At last the first light wave came like a caress, swiiissshhh, and carried away, glugluglug, Elena Sclafani and her beauty, while Michela Pardo's tits, belly, arched body and eyes likewise disappeared. Once Montalbano the man was erased, all that should remain was Inspector Montalbano - a kind of abstract function, the person who was supposed to solve the case and nothing more, with no personal feelings involved. But as he was telling himself this, he knew perfectly well that he could never pull it off. As he gets older, Inspector Montalbano is plagued by existential questions. But he doesn't have much time to wax philosophical before the gruesome murder of a man - shot in the face at point-blank range with his pants down -commands his attention. Add two evasive, beautiful women as prime suspects, dirty cocaine, dead politicians, mysterious computer codes, and a series of threatening letters, and things soon get very complicated at the police headquarters in Vigata. Paper Moon is followed by the tenth book in the Inspector Montalbano series, August Heat.