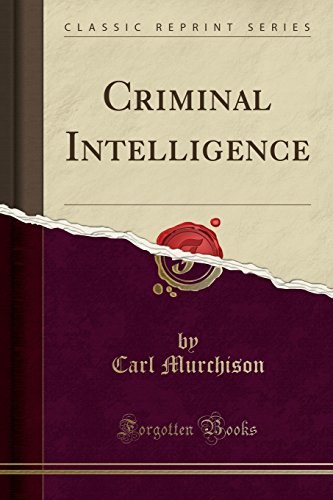 Buchbeschreibung Paperback. Zustand: New. Language: English. Brand new Book. Excerpt from Criminal Intelligence This material is offered for the special consideration of lawyers, psychologists, sociologists, social workers, and all those who have to do with the formulation of criminal law, the treat ment of criminals, and the moulding of public opinion concern ing the enemies of organized society. During the period immediately following the signing of the Armistice, while the writer was acting as Chief Psychological Examiner at Camp Sherman, Ohio, it became possible to be gin the collection of data presented in this book. The writer had been asked to appear before a joint session of the Finance Committee of the Ohio General Assembly, for the purpose of presenting some data in regard to the prevalence of feeble-mindedness in the State of Ohio. At that meeting, the writer met Warden Thomas of the Ohio Penitentiary, and he suggested that a mental test be given to the prisoners in that prison. General Smith, Commanding General of Camp Sher man, generously allowed the author the necessary leave, and ordered any help needful. All the men in that prison who could be spared from their duties were marched in groups into the dining hall and given the Alpha mental test under the same conditions described for recruits in Volume 15 of the Memoirs of the National Academy of Sciences, except that no literacy requirement was used. About the Publisher Forgotten Books publishes hundreds of thousands of rare and classic books. Find more at This book is a reproduction of an important historical work. Forgotten Books uses state-of-the-art technology to digitally reconstruct the work, preserving the original format whilst repairing imperfections present in the aged copy. In rare cases, an imperfection in the original, such as a blemish or missing page, may be replicated in our edition. We do, however, repair the vast majority of imperfections successfully; any imperfections that remain are intentionally left to preserve the state of such historical works. ***** Print on Demand *****. Bestandsnummer des Verkäufers PWW9780365185963