Frieden, Jeffry A.; Lake, David A.; Schultz, Kenneth A. 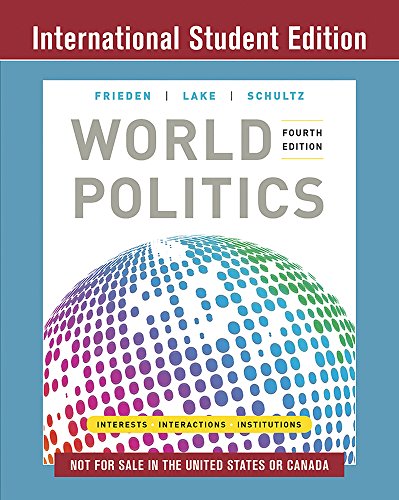 With a framework based on interests, interactions and institutions, World Politics gives students the tools to understand international relations. In the thoroughly updated Fourth Edition, new Controversy units provide models for applying the concepts in each chapter to real-world issues and events. New InQuizitive activities-created and tested by instructors who teach with World Politics-then invite students to practise applying the analytical tools from the text to alternative examples and cases.

Jeffry A. Frieden is the Stanfield Professor of International Peace at Harvard University. A specialist on the politics of international financial relations, he is also coauthor, with Menzie Chinn, of Lost Decades, a history of the 2008 financial crisis. David A. Lake is the Jerri-Ann and Gary E. Jacobs Professor of Social Sciences and Distinguished Professor of Political Science at the University of California, San Diego (UCSD). He is, most recently, the author of Hierarchy in International Relations. His other books include Entangling Relations: American Foreign Policy in Its Century and Power, Protection and Free Trade: International Sources of U.S. Commercial Strategy, 1887-1939. In addition, he is co-editor of 10 volumes and author of over 80 articles and book chapters on international relations, international political economy, and American foreign policy. He is Associate Dean of Social Sciences and Director of the Yankelovich Center for Social Science Research at UCSD. In 2013, he received the UCSD's Chancellor's Associates Awards for Excellence in Research in Humanities and Social Sciences. Kenneth A. Schultz is Professor of Political Science at Stanford University. His research examines international conflict and conflict resolution, with particular focus on the domestic political influences on foreign policy choices. He is the author of Democracy and Coercive Diplomacy, as well as numerous book chapters and articles in scholarly journals. He received the 2003 Karl Deutsch Award from the International Studies Association, and the 2011 Dean's Award for Distinguished Teaching from Stanford's School of Humanities and Sciences.

Buchbeschreibung Zustand: New. Books may ship from multiple locations for easy availability and logistics. PO Box orders may take a little longer for deliveries. All orders are shipped via Fedex/DHL with tracking numbers, other than Remote areas/unserviced areas. Bestandsnummer des Verkäufers abe-56190