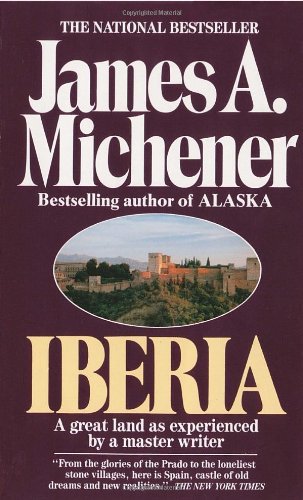 Book by Michener James A

Spain is an immemorial land like no other, one that James A. Michener, the Pulitzer Prize–winning author and celebrated citizen of the world, came to love as his own.Iberia is Michener’s enduring nonfiction tribute to his cherished second home. In the fresh and vivid prose that is his trademark, he not only reveals the celebrated history of bullfighters and warrior kings, painters and processions, cathedrals and olive orchards, he also shares the intimate, often hidden country he came to know, where the congeniality of living souls is thrust against the dark weight of history. Wild, contradictory, passionately beautiful, this is Spain as experienced by a master writer.

“From the glories of the Prado to the loneliest stone villages, here is Spain, castle of old dreams and new realities.”—The New York Times

“Massive, beautiful . . . unquestionably some of the best writing on Spain [and] the best that Mr. Michener has ever done on any subject.”—The Wall Street Journal

“A dazzling panorama . . . one of the richest and most satisfying books about Spain in living memory.”—Saturday Review

“Kaleidoscopic . . . This book will make you fall in love with Spain.”—The Houston Post

e, beautiful...Unquestionably some of the best writing on Spain...The best that Mr. Michener has ever done on any subject...Stunning...Memorable."
THE WALL STREET JOURNAL
Here, in the fresh, vivid prose that is James Michener's trademark, is the real Spain as he experiences it. He not only reveals the celebrated Spain of bullfights and warror kings, painters and processions, cathedrals and olive orchards; he also shares the intimate, often hidden Spain he has come to know, where toiling peasants and their honest food, the salt of the shores and the oranges of the inland fields, the congeniality of living souls and the dark weight of history conspire to create a wild, contradictory, passionately beautiful land, the mystery called Iberia.