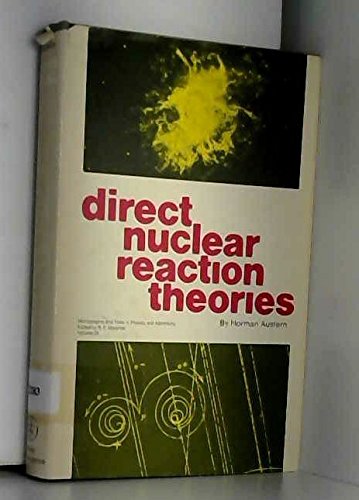 Buchbeschreibung Hardcover. Zustand: Good. First Printing [Stated]. ix, [1], 390 pages. Illustrations. Occasional Footnotes. References. General References. Index. Ex-library with usual library markings. Cover has some wear and soiling. Austern (1926-2000) was a nuclear physicist. He earned a bachelor's degree from The Cooper Union in 1946 and a Ph.D. from the University of Wisconsin in 1951. He was a research associate at Cornell University from 1951 to 1954 and a scientist at New York University's Institute of Mathematical Sciences from 1954 to 1956. He was a Fulbright Research Scholar in Australia from 1957 to 1958 and from 1968 to 1969. He held several visiting professorships and fellowships in England, France and Japan. Austern joined the University of Pittsburgh physics faculty in 1956 as an assistant professor. He was promoted to full professor in 1962, and retired in 1994. Austern played a leading role in the 1950's when the University of Pittsburgh's research was central to understanding the structure of the nucleus. His specialty was theoretical nuclear physics, including nuclear reactions and electro-magnetic effects in nuclei. He published more than 100 journal articles. His textbook, Direct Nuclear Reaction Theories, was published in 1970. In nuclear physics and nuclear chemistry, a nuclear reaction is semantically considered to be the process in which two nuclei, or else a nucleus of an atom and a subatomic particle (such as a proton, neutron, or high energy electron) from outside the atom, collide to produce one or more nuclides that are different from the nuclide(s) that began the process. Thus, a nuclear reaction must cause a transformation of at least one nuclide to another. If a nucleus interacts with another nucleus or particle and they then separate without changing the nature of any nuclide, the process is simply referred to as a type of nuclear scattering, rather than a nuclear reaction. In principle, a reaction can involve more than two particles colliding, but because the probability of three or more nuclei to meet at the same time at the same place is much less than for two nuclei, such an event is exceptionally rare (see triple alpha process for an example very close to a three-body nuclear reaction). "Nuclear reaction" is a term implying an induced change in a nuclide, and thus it does not apply to any type of radioactive decay (which by definition is a spontaneous process). Natural nuclear reactions occur in the interaction between cosmic rays and matter, and nuclear reactions can be employed artificially to obtain nuclear energy, at an adjustable rate, on demand. Perhaps the most notable nuclear reactions are the nuclear chain reactions in fissionable materials that produce induced nuclear fission, and the various nuclear fusion reactions of light elements that power the energy production of the Sun and stars. Nuclear reactions may be shown in a form similar to chemical equations, for which invariant mass must balance for each side of the equation, and in which transformations of particles must follow certain conservation laws, such as conservation of charge and baryon number (total atomic mass number). Bestandsnummer des Verkõufers 73431