Verwandte Artikel zu The Strange Story of the Quantum

Hoffmann, Banesh The Strange Story of the Quantum 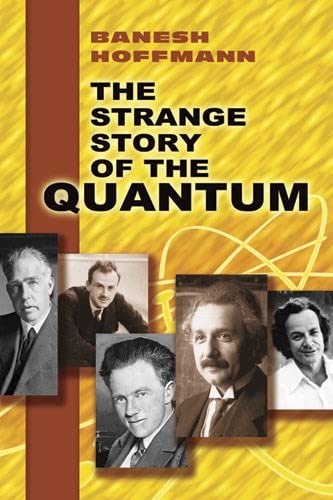 HOFFMANN, B. THE STRANGE STORY OF THE QUANTUM. AN ACCOUNT FOR THE GENERAL READER OF THE GROWTH OF THE IDEAS UNDERLYING OUR PRESENT ATOMIC KNOWLEDGE [1947, REPRINT]. MINEOLA, N.Y., 1959, xi 285 p.,. Encuadernacion original. Nuevo.

This timeless exploration of the work of the great physicists of the early 20th century employs analogies, examples, and imaginative insights rather than computations to explain the dramatic impact of quantum physics on classical theory. Topics include Pauli's exclusion principle, Schroedinger's wave equation, Heisenberg's uncertainty principle, and many other concepts. 1959 edition.
Reissue of the Dover 1959 edition.

Banesh Hoffmann (1906-86) received his PhD from Princeton University. At Princeton's Institute for Advanced Study, he collaborated with Albert Einstein and Leopold Infeld on the classic paper "Gravitational Equations and the Problem of Motion." Hoffmann taught at Queens College for more than 40 years.
Banesh Hoffmann: Strange But True
Though Banesh Hoffmann spent most of his teaching career at Queens College in New York, as a young man he worked with Albert Einstein and other members of the Einstein generation at Princeton, and so he was ideally situated to make the attempt to explain quantum theory to the layman. First published in 1947, the first edition of Hoffmann's book carried the unwieldy subtitle, "An Account for the General Reader of the Growth of the Ideas Underlying our Present Atomic Knowledge." Continuously in print since it first appeared, the book ― along with George Gamow's Thirty Years That Shook Physics, also long a Dover book ― seems to have mostly succeeded. In any case, almost every reader could at least derive some enjoyment from passages such as the one above. At Dover we were privileged to enjoy Professor Hoffmann's urbane and witty conversation directly as he often visited us into the 1980s while serving as an occasional advisor and consultant.
From the Book:
"It did not cause anxiety that Maxwell's equations did not apply to gravitation, since nobody expected to find any link between electricity and gravitation at that particular level. But now physics was faced with an entirely new situation. The same entity, light, was at once a wave and a particle. How could one possibly imagine its proper size and shape? To produce interference it must be spread out, but to bounce off electrons it must be minutely localized. This was a fundamental dilemma, and the stalemate in the wave-photon battle meant that it must remain an enigma to trouble the soul of every true physicist. It was intolerable that light should be two such contradictory things. It was against all the ideals and traditions of science to harbor such an unresolved dualism gnawing at its vital parts. Yet the evidence on either side could not be denied, and much water was to flow beneath the bridges before a way out of the quandary was to be found. The way out came as a result of a brilliant counterattack initiated by the wave theory, but to tell of this now would spoil the whole story. It is well that the reader should appreciate through personal experience the agony of the physicists of the period. They could but make the best of it, and went around with woebegone faces sadly complaining that on Mondays, Wednesdays, and Fridays they must look on light as a wave; on Tuesdays, Thursdays, and Saturdays, as a particle. On Sundays they simply prayed."
Critical Acclaim for The Strange Story of the Quantum:
"The informal and pleasant style of writing facilitates concentration on the subject matter, of which the discussions are regularly accurate, illuminating and provocative." ― Paul Bender, Chemistry and Engineering News

The Strange Story of the Quantum (Paperback)

Buchbeschreibung Paperback. Zustand: New. New edition. Language: English. Brand new Book. Completely non-mathematical, yet wholly faithful to the basic concepts of quantum mechanics, this book tells the fascinating story of the most thoroughgoing revolution in physics since Newton.In the first year of the twentieth century, a professor of theoretical physics in Berlin, Max Planck, suggested that light was not absorbed smoothly, but rather in small bundles or quanta. Five years later, a Swiss patent clerk, Albert Einstein, proposed that the radiation itself must exist as quanta. Thus was born a new age in physics -- the age of the quantum -- in which some of the most basic assumptions of classical physics were swept away, and a magnificent new theoretical structure created.This new physics was steeped in higher mathematics. Its concepts were often in contradiction with common sense. It rapidly became increasingly abstract and complex, to such an extent that even those well versed in classical physics were often unable to follow its labyrinthine turns and twists. How then could the layman understand it?This book answers that question. By means of analogies, examples, and imaginative insights, it acquaints the layman with the historical development and basic meaning of such momentous theories and discoveries as Bohr's energy levels of the atom, Pauli's exclusion principle, de Broglie's wave theory, Bohr's correspondence principle. Schroedinger's wave equation, Heinsenberg's uncertainty principle, Dirac's fundamental laws of quantum mechanics, Sommerfeld's fine structure theory, Feynman's world lines, electron spin, invariance, the quantum number, and numerous other concepts that so drastically changed our notion of the universe. A long postscript, written especially for this edition, brings the reader abreast of events to 1958. Of the books attempting an account of the history and contents of modern atomic physics which have come to my attention, this is the best. The captivating beauty of its prose, the ingenuity of its organization and the peculiar adequacy of its analogies entitle a reviewer of this book to such luxurious praise. -- Henry Margenau, Professor of Physics, Yale University. Bestandsnummer des Verkõufers TER9780486205182