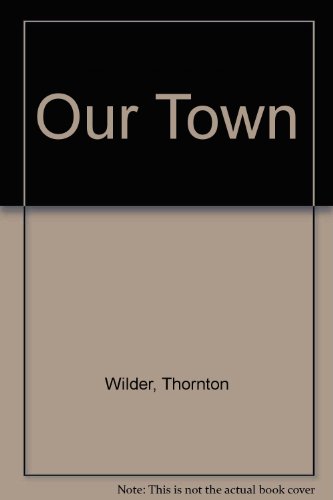 Buchbeschreibung Hardcover. Zustand: Near Fine. Zustand des Schutzumschlags: Good. Special Edition. OUR TOWN, A PLAY IN THREE ACTS, Thornton Wilder, hardcover with dust jacket (not price-clipped), Large Type Edition (complete and unabridged), 1978. BOOK CONDITION: near fine. Text block in fine condition, with no dog-ears, marks, or tears. Not a library book, but this is a remainder. No bookplate nor signature of prior owner. The black cloth boards are in good condition (small area of front cover is puckered; spine bumped top). Dust jacket is in good condition (slight chipping and wrinkling along edges; front cover is rubbed). 11 Ľ x 8 ˝, 103 pages, 21 ounces. NOTE THAT SINCE THE BOOK WEIGHS OVER ONE POUND, THERE MAY BE ADDITIONAL SHIPPING CHARGES IF YOU REQUIRE PRIORITY MAIL OR LIVE OUTSIDE THE USA.XX [From the dust jacket] This is a definitive edition of Thornton Wilder's best-known and most frequently performed play. First produced and published in 1938, at which time it won the Pulitzer Prize, its reputation as an American classic has increased over the years. Brooks Atkinson, in his review of Our Town's first performance, had this to say: "Taking as his material three periods in the history of a placid New Hampshire town, Mr. Wilder has transmuted the simple events of human life into reverie. He has given familiar facts a deeply moving, philosophical perspective. Our Town is, in this columnist's opinion, one of the finest achievements of the current stage." Its universal appeal is set forth by the Stage Manager in the play: "This is the way we were in our growing up and in our marrying and in our doctoring and in our living and in our dying." [From Wikipedia] Throughout, Wilder uses metatheatrical devices, setting the play in the actual theatre where it is being performed. The main character is the stage manager of the theatre who directly addresses the audience, brings in guest lecturers, fields questions from the audience, and fills in playing some of the roles. The play is performed without a set on a mostly bare stage. With a few exceptions, the actors mime actions without the use of props. Our Town was first performed at McCarter Theatre in Princeton, New Jersey in 1938. It later went on to success on Broadway and won the Pulitzer Prize for Drama. It remains popular today and revivals are frequent. Wilder began making notes for the play, while he was teaching and lecturing in Chicago in the 1930s. A constant traveler, he wrote it everywhere he went. In June 1937, he stayed in the MacDowell Colony in Peterborough, New Hampshire, one of the many locations where he worked on the play. It is believed Wilder drafted the entire third act during a visit to Zürich in September 1937, in one day, after a long evening walk in the rain with a friend, author Samuel Morris Steward. Bestandsnummer des Verkäufers 001448