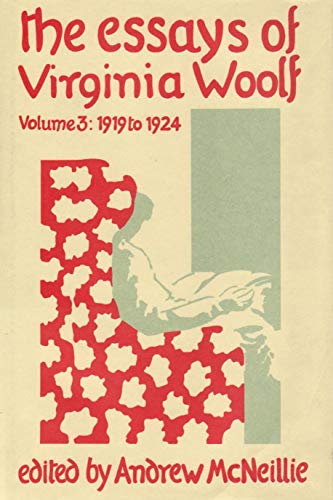 This is the third volume in a series on the complete non-fiction work of Virginia Woolf, which contains her essays, diaries and letters.

This particular book is a compilation of Virginia Woolf's reviews and essays, including 80 previously uncollected pieces, spanning the years 1919-1924, while she worked on her novels "Night and Day", "Jacob's Room" and "Mrs Dalloway" and edited works such as T.S.Eliot's "The Wasteland" for The Hogarth Press. They reveal not only her talent as a critic and essayist, but also provide an insight into her understanding of writing, her creativity and her opinions on plays, films and paintings.

Virginia Woolf (1882-1941) is one of English literature's greatest writers renowned for her novels, stories, diaries and letters. With her husband Leonard Woolf, she founded The Hogarth Press.

Virginia Woolf was born in London in 1882, the daughter of Sir Leslie Stephen, first editor of The Dictionary of National Biography. After his death in 1904 Virginia and her sister, the painter Vanessa Bell, moved to Bloomsbury and became the centre of ‘The Bloomsbury Group’. This informal collective of artists and writers which included Lytton Strachey and Roger Fry, exerted a powerful influence over early twentieth-century British culture.

In 1912 Virginia married Leonard Woolf, a writer and social reformer. Three years later, her first novel The Voyage Out was published, followed by Night and Day (1919) and Jacob's Room (1922). These first novels show the development of Virginia Woolf's distinctive and innovative narrative style. It was during this time that she and Leonard Woolf founded The Hogarth Press with the publication of the co-authored Two Stories in 1917, hand-printed in the dining room of their house in Surrey. Between 1925 and 1931 Virginia Woolf produced what are now regarded as her finest masterpieces, from Mrs Dalloway (1925) to the poetic and highly experimental novel The Waves (1931). She also maintained an astonishing output of literary criticism, short fiction, journalism and biography, including the playfully subversive Orlando (1928) and A Room of One's Own (1929) a passionate feminist essay. This intense creative productivity was often matched by periods of mental illness, from which she had suffered since her mother's death in 1895. On 28 March 1941, a few months before the publication of her final novel, Between the Acts, Virginia Woolf committed suicide.

Buchbeschreibung Zustand: Poor. Volume 3. This is an ex-library book and may have the usual library/used-book markings inside.This book has hardback covers. In poor condition, suitable as a reading copy. Dust jacket in good condition. Please note the Image in this listing is a stock photo and may not match the covers of the actual item,1000grams, ISBN:9780701206680. Bestandsnummer des Verkäufers 9380080