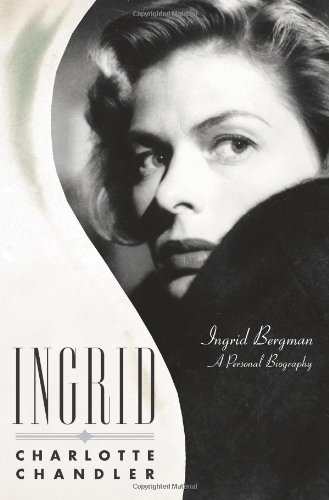 "Over the years, writer Charlotte Chandler's friendships with an impressive array of figures of the American and European cinema have resulted in a series of revealing and engaging biographies on Federico Fellini, Billy Wilder and others. Her latest is "Ingrid," a personal biography of Ingrid Bergman. Chandler avoids analyzing her subjects and their careers, instead bringing them to life through their words and those of relatives, friends and colleagues gathered over many years.Chandler also has amassed in this book a treasure trove of revelations...Bergman and Rossellini emerge as individuals of much passion and generosity of spirit."-- "LA Times"

Ingrid Bergman was one of the biggest and most glamorous stars in Hollywood - until she became one of the most controversial, when an international scandal threatened to end her career. She had starred in several now-classic films such as Casablanca, Spellbound, Notorious and Gaslight, and her co-stars included such Hollywood icons as Humphrey Bogart, Cary Grant, and Gregory Peck. In this insightful new biography, Charlotte Chandler draws on her extensive conversations with Bergman herself to describe what happened from Bergman's point of view, revealing a complex and fascinating woman who lived life intensely. Already a movie star in her native Sweden, Ingrid Bergman became an instant sensation for David O. Selznick in Hollywood and the number-one box-office star in the world. But the most dramatic event in her life took place off the screen when she made a film in Italy and began a passionate romance with her director, Roberto Rossellini. The scandal that followed left her exiled from America, ostracized by Hollywood, vilified in the press, denounced by clergy, censured in the U.S. Senate - and separated from her young daughter. She was able to make films only with Rossellini. In the words of those who were involved, Chandler describes Bergman's life before, during, and after the scandal. Among those Chandler spoke with were Alfred Hitchcock, George Cukor, Sidney Lumet, Cary Grant, Gregory Peck, Greta Garbo, and Liv Ullmann. She spoke with Roberto Rossellini; their twin daughters, Isabella and Isotta Ingrid; Rossellini's son, Renzo; Ingrid's daughter Pia Lindstrom; and others who knew Ingrid well. This extraordinary access makes Ingrid: Ingrid Bergman, a Personal Biography the most perceptive and revealing book ever written about the charismatic Hollywood legend.

Buchbeschreibung Hardcover. Zustand: New. Excellent condition. Interior is tight, bright and clean; no underlining, notes or highlighting. Hard covers are tight and stiff. Complete with original and sticker free paper dust cover. Minor scuffing and/or wrinkles on the paper dust cover. 100% Satisfaction Guaranteed. All items are carefully enclosed with bubble wrap. We ship promptly and worldwide via US Post and will email you a tracking number. Bestandsnummer des Verkõufers SKU0063908