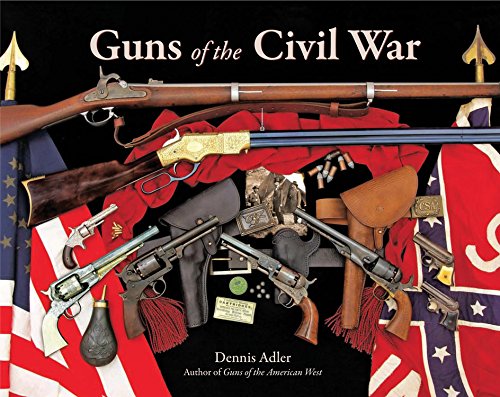 Guns of the Civil War traces the evolution of gun making in the war torn South as well as those manufactured by established makers in the Civil War era. This book examines the guns developed by Colt's, Smith & Wesson, E. Remington & Sons, Whitney, Rogers & Spencer, Manhattan, Savage, and countless others that have become little more than obscure footnotes to our nation's greatest arms race. It takes you through the development of America's most legendary 19th century handguns and rifles and the roles they played in our nation's history.

As the Civil War erupts, the author follows the politics of a country divided and how the North and South chose to arm their soldiers. In the tales of this great conflagration, Adler takes you step by step through the evolution of loose powder cap and ball revolvers and rifles in use, as well as the early development of the self contained metallic cartridge that was to play a monumental role in arming both the Union and Confederacy as the war continued, and the sweeping changes in firearms design that resulted in the aftermath.

This is a sprawling history of a country built on the sweat and ambition of inventors, adventurers, and industrialists who, divided by differing cultures and thrust into a conflict that nearly tore our nation apart, brought all of their talents to bear in fighting a war to reunite country and its people.

Dennis Adler is an avid automotive enthusiast, writer, and photographer who has written several books including Packard, Chrysler, and Fifties Flashback: The American Car. He lives Pennsylvania.