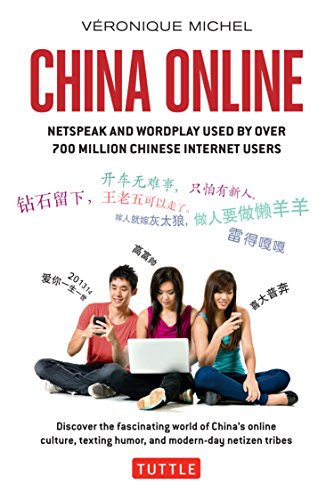 "China Online takes us into the unknown world of 700 million Internet users. In her book, which is both serious and humorous, Veronique Michel sheds new light on the most recent developments in Chinese society and demonstrates the extraordinary adaptability of its bimillenary writing." -Alain Labat, Editor in Chief, Planete Chinois (Chinese Planet) "The Chinese aren't well understood in general, and the Chinese online world even less so. With China Online Veronique Michel lets us access its language and get to know its speakers." -Herve Cantal, Chinese Language and Cultural Association, Passeport pour la Chine "Very accessible, and full of Chinese humor! This captivating book is a methodical exploration of the new language codes of the 'ultra-connected' generation... The youth in China are the majority and they understand how to situate themselves in the global village..." -Le Petit Journal, Hong Kong "Her insight into the cultural power of these words and phrases is spot on - these sayings and practices are as playful and fun as they are deeply meaningful, making them the perfect gateway to finding common ground on social issues. Michel hopes her work will help foster deeper cultural connections in an increasingly globalized world and show people a side of China that they rarely see: its creativity and innovative spirit." -Huffington Post "Her book sheds light on current events in China and, like a magic broom, clears a doorway to reveal the lives of modern-day Chinese." -Journal of The Chinese Language Teachers Association "To paraphrase a blundering local politician quoted in this book, Chinese must be one of the easiest languages to learn - why else would nearly 1.4 billion people speak it? China Online is an insight into contemporary China's so-called Netspeak, revealing the ability of the country's 700 million Internet users to coin bizarre neologisms." -Japan Times "China Online inventories numerous expressions used on, invented for, and popularized by the users of the Internet. -The Weibo Empire (blog of Le Monde) "With its common sayings, popular wisdom, and wordplay, China Online describes a youth culture in transition - using humor and creativity to survive in a hugely competitive environment. There is a great deal that lies under the surface and the ability to look below the surface is a valuable key to facilitate successful communication, Michel says. The book is a fun read for those interested in the modern-day 'tribes' on the Internet." -Shanghai Daily

Dive into China's new web-based subculture of tech-savy, subversive netizens with China Online! Using Baidu, China's form of Google, young Chinese web-surfers are creating their own language on the Internet. With this book, you can get an insider's view of the way the new wave of Chinese youth communicates in code. Author and translator Veronique Michel guides you on a tour of the lifestyles inhabiting modern-day "tribes" on the Internet: The "Moonlight" or "Starlight" Tribe The "Ant" Tribe The "Corporate Insects" The "Diamond Man" China Online describes a youth culture in transition-using humor and creativity to survive in a hugely competitive environment. They enjoy puns-including the ingenious "talking numbers" used to say more things with fewer keystrokes and characters. There is a great deal that lies under the surface. Learn the secret netspeak used by over half a billion of the coolest people in China, and be in the know!. NOTA: El libro no está en espańol, sino en inglés.

Buchbeschreibung Paperback. Zustand: New. Claude Muller, Sebastien Koval, Marcio Lobo (illustrator). Language: English. Brand new Book. Dive into China's new internet subculture of tech-savvy, creative digital citizens with China Online! Using Baidu, China's version of Google, young Chinese internet users have invented their own form of digital language. With this book, you can get an insider's view of how the new generation of Chinese youth communicates in code. Author and translator Veronique Michel acts as your guide on a tour of the lifestyles of modern-day Internet groups, or "tribes," including:The "Moonlight" or "Starlight" TribeThe "Low Carbon Footprint" TribeThe "Ants"The "Corporate Insects"The "Diamond Bachelor"China Online describes a youth culture in transition-using humor and creativity to survive in a hugely competitive environment. Michel describes how users enjoy puns, mix languages, and use ingenious "talking numbers" to say more things with fewer keystrokes and characters. There is a great deal that lies under the surface. Learn the secret lingo used by over half a billion young people in China, and be in the know!. Bestandsnummer des Verkäufers INJ9780804844369