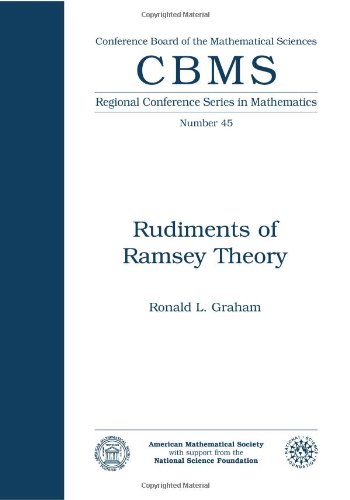 It is no exaggeration to say that over the past several decades there has been a veritable explosion of activity in the general field of combinatorics. Ramsey theory, in particular, has shown remarkable growth. This book gives a picture of the state of the art of Ramsey theory at the time of Graham's CBMS lectures. In keeping with the style of the lectures, the exposition is informal. However, complete proofs are given for most of the basic results presented. In addition, many useful results may be found in the exercises and problems. Loosely speaking, Ramsey theory is the branch of combinatorics that deals with structures that are preserved under partitions. Typically, one looks at the following kind of question: If a particular structure (e.g., algebraic, combinatorial or geometric) is arbitrarily partitioned into finitely many classes, what kinds of substructures must always remain intact in at least one of the classes? At the time of these lectures, a number of spectacular advances had been made in the field of Ramsey theory. These include: the work of Szemeredi and Furstenberg settling the venerable conjecture of Erdos and Turan, the Nesetril-Rodl theorems on induced Ramsey properties, the results of Paris and Harrington on ``large'' Ramsey numbers and undecidability in first-order Peano arithmetic, Deuber's solution to the old partition regularity conjecture of Rado, Hindman's surprising generalization of Schur's theorem, and the resolution of Rota's conjecture on Ramsey's theorem for vector spaces by Graham, Leeb and Rothschild. It has also become apparent that the ideas and techniques of Ramsey theory span a rather broad range of mathematical areas, interacting in essential ways with parts of set theory, graph theory, combinatorial number theory, probability theory, analysis and even theoretical computer science. These lecture notes lay out the foundation on which much of this work is based. Relatively little specialized mathematical background is required for this book. It should be accessible to upper division students.

Buchbeschreibung Zustand: Very Good. *Price HAS BEEN REDUCED by 10% until Tuesday, July 5 (holiday sale item)* 65 pp., Paperback, small hand stamp to the title page, else very good. - If you are reading this, this item is actually (physically) in our stock and ready for shipment once ordered. We are not bookjackers. Buyer is responsible for any additional duties, taxes, or fees required by recipient's country. Bestandsnummer des Verkäufers ZB1189500

Buchbeschreibung Paperback. Zustand: Very Good. ALL ITEMS ARE SENT BY ROYAL MAIL. DISPATCHED FROM THE UK WITHIN 24 HOURS ( BOOKS ORDERED OVER THE WEEKEND DISPATCHED ON MONDAY) BY ROYAL MAIL. ALL OVERSEAS ORDERS SENT BY AIR MAIL. WE ALSO ACCEPT PAYMENT IN US DOLLARS OR EURO BY BANK TRANSFER. IF YOU ARE LOCATED OUTSIDE THE UK PLEASE ASK US FOR A POSTAGE QUOTE FOR MULTI VOLUME SETS BEFORE ORDERING. Bestandsnummer des Verkäufers mon0000837640