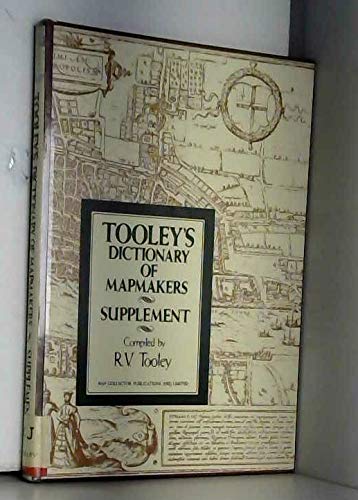 Buchbeschreibung Alan R. Liss, Inc., New York, first edition, 1985, 1985. Cloth, 8vo, x, 116 pp. From the blurb: "Tooley's Dictionary of Mapmakers, already the most comprehensive work of its kind, has now been expanded and completed by the inclusion of new or updated information on over three thousand cartographers. The new information in the Supplement is the result of research by scholars and collectors who have made their work available to Mr. Tooley. The total number of mapmakers dealt with in the Dictionary and the Supplement now approaches the staggering figure of twenty-five thousand. These works, the first of their kind to be produced in English, are the revised, expanded, and completed editions of an incomplete series of listings that appeared intermittently in the now discontinued "Map Collector's Circle." It is the result of a lifetime devoted to maps and cartography that has enabled the author to produce this definitive work. These volumes offer a unique source of information about major as well as lesser known and even obscure workers in the field from all parts of the world. For each individual, the entries contain such essential information as nationality, span of productive years, major works, various addresses, predecessors and successors. Also contained are many interesting highlights of cartographic history: the first maps of certain countries to appear in an atlas, the first map produced by the lithographic process, and the first map issued in the U.S.A. " An ex-library copy with a stamp on the top edge, a label on the front free endpaper, a label and stamps on the verso of the title-page, and a security label on the rear pastedown endpaper, otherwise near Very Good in a Very Good dustwrapper held in a plastic sleeve which has been attached to the pastedowns. Bestandsnummer des Verkäufers ABE-45734

Buchbeschreibung A. R. Liss, USA, 1985. Soft cover. Zustand: Very Good. 1st Edition. Original bdg. Dust wrapper. 4to. (28 x 20 cm). In English. [x], 116 p., b/w ills. and maps. Tooley's dictionary of mapmakers: Supplement. "The credentials of the author are well known to professionals in the history of cartography and to map collectors all over the world. Mr. Tooley's long professional life has been devoted to the study of maps and atlases. His book 'Maps and map-makers (originally published in 1949) sold widely in Britain, Europe, and the United States and has gone into many editionss. For many years he was editor of 'Map collector's circle' and is now co-editor of 'Map collector'. He was written, edited, and contributed widely.". Bestandsnummer des Verkäufers 049490