Verwandte Artikel zu Magellans of the Sky Four Against the Wind: The Epic...

Johnson, Norm Magellans of the Sky Four Against the Wind: The Epic Tale of the First Flight Around the World in 1924

Magellans of the Sky Four Against the Wind: The Epic Tale of the First Flight Around the World in 1924 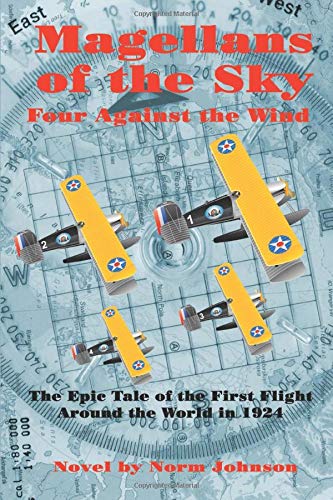 Magellans of the Sky is the story of the First Flight Around the World in 1924. In flimsy, open cockpits, eight brave United States Army aviators defied all the elements, even the opposition and derision of their contemporaries, to be the first to circumvent the globe. Ultimately, they defied death itself!

Today in an age when long distance flight is as commonplace as driving a car, when astronauts are continually blasting into space, when brave men and women have given their life in the pursuit of space flight, it is possible to forget a time many years ago when a journey of any distance was truly difficult. Back then just flying cross-country was a cause for celebration and headlines. It was not an everyday occurrence. But, daring to dream of flying around the world was considered by many as just pure madness! Impossible they said!

In 1924 eight men, members of the United States Army Air Service, started out to conquer fear and distance. Six of them completed the journey. Their story is not well known today. History books rarely mention the subject. The men, however, were heroes then just as astronauts are today. They were the Magellans of the Twentieth Century. The flight was fraught with danger, including a near death crash in the frozen wilds of Alaska and another near-death crash in the freezing waters of the North Atlantic Ocean.

The Four Donald Douglas built air cruisers flown are the kind you find in air museums today. They are ancient, primitive and frightening compared to our modern ships of the air and space. If a pilot were to be asked to fly one of them today, he would laugh and walk away shaking his head. Yet, these flying machines were the forerunner of planes used during World War II, and all the battles that have followed.In those open cockpit planes, men defied all the elements, even the opposition and derision of their contemporaries. They defied death itself. For four men it meant facing death head-on!

The first journey around the world lasted 175 days, when it was scheduled for only 45 days. Every day was an experience filled with anxiety and fraught with danger. They accomplished what many critics of the Air Service, and those within the service along with many politicians, said could not be done. They flew around the world for the first time in the history of man and flight.

They were a remarkable and surprising group of men, a strange mixture brought together by the circumstances of the time. Each had their own motives for risking life and limb on a pioneering mission. Much like our first astronauts, they would be flying into the unknown. The astronauts of today face death every time they blast into space. Their flight is a tale of courage, patriotism, ingenuity, perseverance and high drama more enthralling than any fiction writer could possibly dream up as a plot line. Its success was more a tribute to collective daring than the development of aeronautical sciences in 1924. Others would have chosen to wait (in fact many thought they should wait for financial reasons and after all there wasn’t a plane built or even designed capable of flying around the world). But those skeptics who were predicting doom did not know these particular men. They accepted the challenge when it became available. Natural or man-made obstacles would not shake their resolve.

The story of the First Flight Around the World is an adventure rivaling any since Daedalus and Icarus and man’s first dreams of becoming airborne. As we continue to take bold steps into space, the time is long overdue to tell the story of one bold step into the unknown. This is that story!

1. Magellans of the Sky Four Against the Wind: The Epic Tale of the First Flight Around the World in 1924