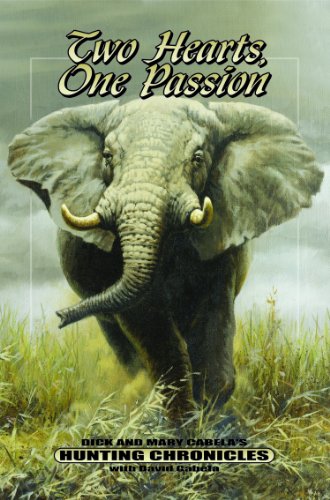 Together, Dick and Mary cabela have discovered a life of adventure - a life of hunting, fishing and the sporting tradition. Two Hearts, One Passion is their story, a story of two hunting partners who see a world worth exploring and have spent their lives pursuing the passion that brought their hearts together.. NOTA: El libro no está en espańol, sino en inglés.

"We are hunters - it is part of who we are, of who we've always been" Dick and Mary Cabela were connected long before they met, linked by a need to give chase. Later, they founded one of the best-known outfitting companies in the world, together. They raised a family, together. Through it all, they hunted - together. Whether it was upland birds on the Nebraska plains, kudu in Zimbabwe, water buffalo in Australia or mountain nyala in Ethiopia, they've hunted it with each other. Like in one harrowing tale, when Dick and Mary followed elephant tracks into a dense Ethiopian rainforest, only to become the hunted when the elephant charged. No matter where their adventures take them, they never forget their humble beginnings. At it's core, Dick and Mary's story is a quest to experience, if only briefly, the awe, wonder and freedom they knew when life was simple, when they were children, stepping into a world wanting nothing but to be explored. It's a story about two people from simple backgrounds, who discovered together dreams are attainable and the most complex of human emotions lie in life's simplicities.