Katzs Autobiography of a Delicatessen 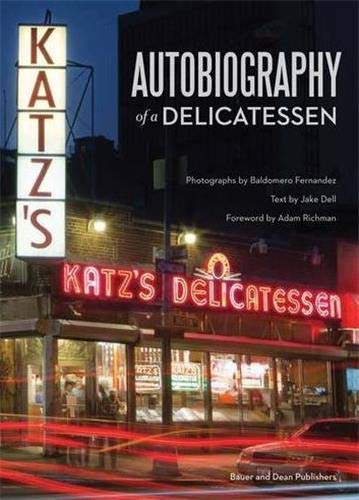 Located on the corner of Ludlow and E. Houston in New York City, Katz's Deli is a destination for thousands of tourists and for the many regulars who have kept the tradition of Friday evening hot dogs going strong for 125 years. Established in 1888, Katz's has carried on the tradition of Jewish deli food long after the refrigerator made pickled meats an aesthetic choice instead of a necessity. Hundreds of colour photographs document the unique character of Katz's Deli. Included are the people on both sides of the counter - cutters and customers - the pastrami stations, photo-covered walls, kitchen and more. The text outlines the deli's long history, defines the difference between pastrami and corned beef, and more. This first-ever book on Katz's Deli will prove irresistible to regulars whose grandfather took them for their first pastrami, and to the uninitiated who have yet to walk on the sawdust-covered terrazzo floor, ticket in hand.

Jake Dell is part owner of Katz's Delicatessen in New York City, along with his father Alan Dell and uncle, Fred Austin. He is currently in charge of all major operations. Photographer, Baldomero Fernandez, has been taking pictures since age 14. His work has appeared in Life, The New Yorker, Vanity Fair and W Magazine. His many honours include the Communication Arts Magazine Editorial Award of Excellence, received in 2005 for his work done in Cuba.

1. Katz's: Autobiography of a Delicatessen

2. Katz's: Autobiography of a Delicatessen