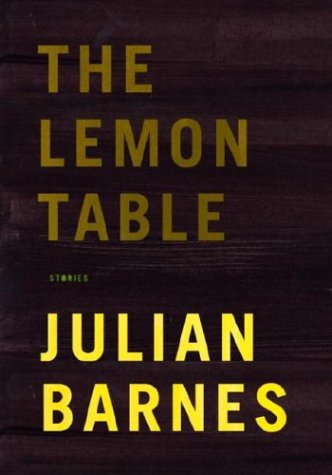 A collection of tales featuring aging characters facing the ends of their lives includes "The Silence," in which a famous composer longs for companionship and resists drinking; "Knowing French," in which an octogenarian begins corresponding with an author; and "Appetite," in which a woman reads elaborate recipes to a sick husband. 15,000 first printing.

Master prose stylist Julian Barnes presents a collection of stories whose characters are growing old and facing the end of their lives -- some with bitterness, some with resignation and others with raging defiance.

“Life is just a premature reaction to death,” was what Viv’s husband used to say. Once her lover and friend, he is now Viv’s semi-helpless charge, who is daily sinking ever deeper into dementia. In “Appetite,” Viv has found a way to reach her husband: by reading aloud snippets of recipe books until he calls out indelible -- and sometimes unfortunate -- scenes locked away in his brain. In “The Things You Know,” two elderly friends enjoy their monthly breakfast meetings that neither would ever think of missing. Of course, all they really have in common is a fondness for flat suede shoes and a propensity for thinking spiteful, unspoken thoughts about one another’s dead husbands. “The Fruit Cage” is narrated by a middle-aged man whose seemingly orderly upbringing is harrowingly undone when he discovers that his parents’ old age is not necessarily a time of serenity but actually an age of aroused, perhaps violent, passions.

In these stories, Julian Barnes displays the erudition, wit and uncanny insight into the human mind that mark him as one of today’s great writers, one whose intellect and humour never obscure a genuine affection for his characters.