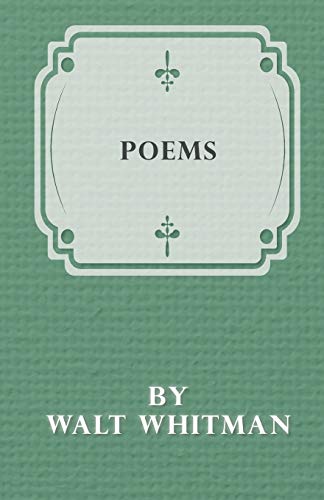 Buchbeschreibung Paperback. Zustand: New. Language: English. Brand new Book. "Poems by Walt Whitman" is a 1899 collection of poems written by Walt Whitman, selected and edited by William Michael Rosetti and first published in 1868. It contains the entire corpus of his published poems, including his most famous work "Leaves of Grass". This fantastic volume will appeal to all poetry lovers and constitutes a must-have for fans of Whitman's seminal work. Content include: "Starting from Paumanok", "American Feuillage", "The Past-Present", "Years of the Unperformed", "Flux", "To Working Men", "Song of the Broad Axe", "Antecedents", "Salut Au Monde!", "A Broadway Pageant", "Old Ireland", "Boston Town", "France", "Europe", "To a Foiled Revolter or Revoltress", etc. Walt Whitman (1819 - 1892) was an American essayist, poet, and journalist who was pivotal to the transition from transcendentalism to realism. His work was notably divisive and claimed by many to be obscene when first published, but he is now considered to be one of the most influential people in the American poetic canon and the "father of free verse". Many vintage books such as this are becoming increasingly scarce and expensive. We are republishing this volume now in an affordable, modern, high-quality edition complete with a specially commissioned new biography of the author. Bestandsnummer des Verkäufers AAV9781473329423