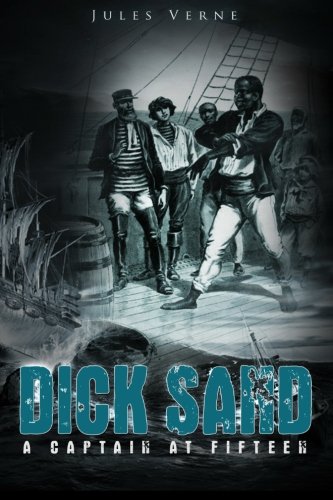 This edition of "Dick Sand - A Captain at Fifteen" includes the original picture illustrations that follow the story line. Unlike most of Jules Verne's other works, this novel, published in 1878, does not contain marvels or new inventions. Instead, it shows a stirring picture of Africa as found by explorers and scientists of the time. Dick Sand, a fifteen year old boy, wants to be ship captain someday. Aboard a whaling ship headed to San Francisco, he and the crew rescue five people and a dog, survivors from the wreck of another ship. After a whaling accident killed the captain and the rest of the crew, and being tricked into landing the ship at Africa, Dick must lead the survivors and find their way home. This coming of age story deals with the pressures of suddenly undertaking an adult responsibility, leadership, revenge, pain of betrayal, and confrontation of the unjustifiable rationale behind the slave trade, set against the stunning backdrop of the African wilderness.

Jules Verne is one of the pioneers of science fiction. His famous novels include A Journey to the Center of the Earth, Around the World in Eighty Days, and Seven Thousand Leagues Under the Sea. He wrote these novels before air, space, and underwater travel became possible. Jules was born in February 8, 1828 in Nantes, France. As a child, he and his brother would rent a boat on the Loire River for one franc per day. Watching the ships navigate the river sparked the young Jules' imagination. After finishing his studies at his boarding school, his father, a lawyer, sent him to Paris to study law. There he found himself attracted to theater and tried his hand at play writing. When his father discovered that he had been writing instead of studying, he withdrew his financial support. Jules was then forced to work as a stockbroker. When he met the publisher Pierre-Jules Hetzel, who was willing to help him with his scientific stories, Jules Verne was able to publish his successful novels.