Verwandte Artikel zu Zintara and the Stones of Alu Cemah

Zintara and the Stones of Alu Cemah 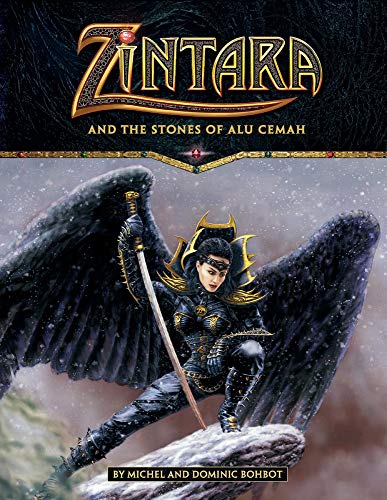 Zintara and the Stones of Alu Cemah is a richly illustrated tale (with almost 200 full-color illustrations) that tells the tale of Zintara, a young exiled princess of a winged race, who embarks on a perilous journey to discover the powerful but dangerous secrets of her ancestors. Only in her lost past can she find the answers she needs to defeat the sorceror Korban's monstrous evil. Thrust into the drama and intrigue of war, magic, and madness, Zintara risks all to save the ones she loves.?Zintara is the descendant of a great dynasty of kings and queens from a winged race, the Xulim Kan. Now she is an orphan, her parents murdered by Drolos the Usurper and the sorceror Korban when she was a young girl. She was saved by M'Hancha, Chancellor of the great nation of Takla, and a mage in his own right.The tale opens ten years later. Takla is at war. The cruel and powerful sorceror Korban has taken over the eastern provinces and now threatens to invade the entire kingdom. Korban's most feared weapons are the fabled Stones of Alu Cemah, mysterious gems that channel power and can be used to heal...or to kill. The Stones have a connection to Zintara's race, but no one, not even the greatest scholars, know what that connection is, or their true history or purpose.Zintara, now a young woman, has learned the arts of battle, and she has found a soul mate in Takla's heir, Prince Ardelann. But Takla is a human kingdom, and Zintara with her wings stands out - a stranger, a freak, and their love must remain a secret. Together with M'Hancha and Takla's King Arvosh, they hatch a daring plan to bring down Korban and save the kingdom. For Korban is not the only one with a Stone. Prince Ardelann has one of the great Stones lodged in his forehead. As a child it saved his life, but now it is slowly killing him. Meanwhile, the scheming Duke Galhuri of Shkun Hadi, Takla's richest and most powerful noble - and the Queen's brother - is secretly allied with Korban, and lays plots to undermine King Arvosh's rule. He will use anyone and anything he can to further his own ends.After a close brush with death, Zintara is forced to flee Takla. But in the process she makes a startling discovery about her lost heritage. The choices she makes and challenges she faces could spell victory...or death far from home. And all the while Korban's power grows, and the fate of the ones she loves hangs in the balance.

Zintara and the Stones of Alu Cemah