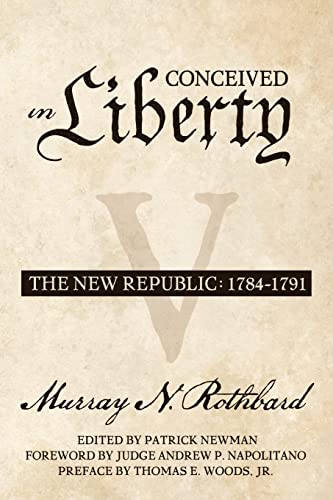 Buchbeschreibung Paperback. Zustand: New. Language: English. Brand new Book. Murray Rothbard was not just a remarkable economist and political thinker, but one of the best revisionist historians of the 20th Century.One of his greatest career accomplishments was Conceived in Liberty, a masterful analysis of the libertarian origins of the American Revolution and the founding of the United States. Written with his lens of "Liberty vs. Power", this book demonstrated both his brilliance and originality - deftly handling a huge amount of research including a vast array of hitherto unknown facts.Unfortunately, due to a tragic technological failing, the original print run of Conceived in Liberty only included the first four of a five-volume work. The fifth volume focusing on the adoption of the Constitution and the Washington Administration, sat dormant for decades as a complete, but handwritten, manuscript.Enter Patrick Newman.As a young Research Fellow at the Mises Institute, Patrick Newman has made incredible use of the Rothbard Archives here in Auburn, AL. Some of his early career achievements include unearthing an original chapter of Man, Economy, and State - providing a fascinating look at Rothbard's own growth as an economist - and editing The Progressive Era, another work focusing on a pivotal period of American history.While none of those projects compared to the work required to translate Murray's handwriting into a complete book project, it provided him with the tools he needed to get the job done. The result is the remarkable resurrection of what will become an important work in the libertarian historical canon.The Fifth Volume of Conceived in Liberty highlights the most important battle of the American project - one that continues to this day - the conflict between those that want to centralize power, and those that choose to stand to defend the American heritage of liberty. This book features a forward from Judge Andrew Napolitano, a preface by Dr. Thomas E. Woods, and an introduction from Dr. Patrick Newman. Bestandsnummer des Verkäufers APC9781610167192

Conceived in Liberty, Volume 5: The New Republic (Paperback or Softback)