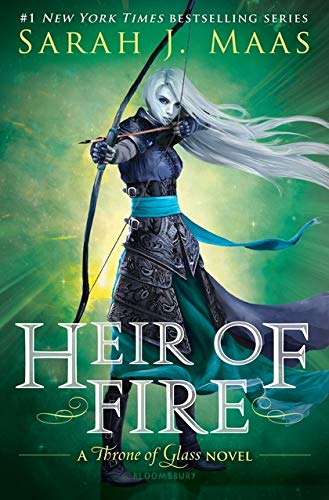 The pages fly by. Series fans will be relieved to hear that this installment is only the halfway point, and thanks to Maas' adroit plot maneuvers, well-wrought characters, and immersive world building, they'll be positively hooked for the forthcoming volumes. (Booklist)

With a finely tuned plot, colorful characters and twists galore, Maas shines as a brilliant storyteller. You'll be swept away by the characters' new challenges and triumphs, while Manon Blackbeak's introduction adds exciting and sharp depth... The most exhilarating installment yet. (RT Book Reviews, Top Pick)

Awards for Crown of Midnight: A New York Times and USA Today bestseller (:)

An epic fantasy readers will immerse themselves in and never want to leave. (Kirkus Reviews, starred review, on Crown of Midnight)

Series fans will be satisfied not only by the intricate plot, dishy romance, and rich world building but they will be thrilled by the prospect of deepening adventures in the next volume. (Booklist on Crown of Midnight)

With assassinations, betrayal, love and magic, this novel has something to match everyone's interests, without feeling cluttered. The action will carry you right to the end, leaving you eager for the next installment. (RT Book Reviews on Crown of Midnight)

Awards for Throne of Glass: A Kirkus Best Teen Book of 2012, Amazon.com Best Book of 2012, YALSA Best Fiction for Young Adults, and MTV Hollywood Crush Best YA Book of 2012 Nominee (:)

Celaena has survived deadly contests and shattering heartbreak-but at an unspeakable cost. Now, she must travel to a new land to confront her darkest truth . . . a truth about her heritage that could change her life-and her future-forever. Meanwhile, brutal and monstrous forces are gathering on the horizon, intent on enslaving her world. Will Celaena find the strength to not only fight her inner demons, but to take on the evil that is about to be unleashed?

The bestselling series that has captured readers all over the world reaches new heights in this sequel to the New York Times best-selling Crown of Midnight. Packed with heart-pounding action, fierce new characters, and swoon-worthy romance, this third book will enthrall readers from start to finish.

Heir of Fire (Throne of Glass)