O'Toole, Fintan Heroic Failure: Brexit and the Politics of Pain 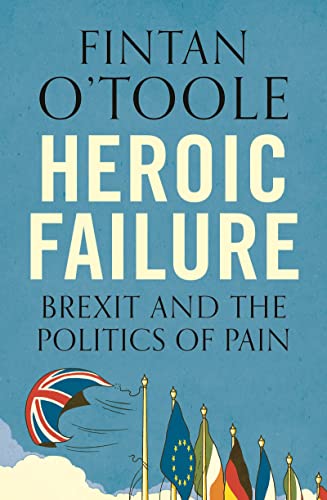 '[O'Toole] is a sharp thinker and he makes many good points ... There is also a lot to learn from his incidental arguments. This is a literary book and I was delighted' The Times.

'The psychopathology of Brexit is at the heart of Fintan O'Toole's compact counterblast' Times Educational Supplement.

'A witty attack on the fantasies that drove Brexit ... Clever, over the top, but entertaining political writing' The Times, Books of the Year.

'What gives this book its distinction is the fact that [O'Toole] is as adept at analysing character (as revealed by language) as he is at marshalling statistics ... O'Toole uncovers and dissects it with the deliberate, affectless skill of a virtuoso surgeon. The result, for me, is a wildly entertaining but uncomfortable read. In short, he has nailed us to the floor with a nine-inch nail. It's certainly not easy bein' English these days, and O'Toole, with this pitilessly brilliant book, has just made it at least fifty shades harder' Jonathan Coe, Irish Times.

'[The Euro] is what British conservative thought has feared since the 1970s. Readers interested in exploring these fears, and pretty much everyone else, should read [this]' Sunday Business Post.

'O'Toole offers a central, sexual metaphor for the fall, in which England alternately dominates and submits' Guardian.

'Britain's psychodrama, as Fintan O'Toole reminds us in his brilliant book, is almost entirely about its reaction to winning World War II, but losing its empire' Sunday Business Post.

'O'Toole has been one of the most astute commentators on Brexit, and here he offers his analysis on the forces in the English psyche that brought it about. Nor does he pull any punches ... He writes to devastating effect, his framing of Brexit as a "weird psychodrama" raising some uncomfortable questions' Herald.

'Fintan O'Toole [...] displays an amazing command of the facts, but what distinguishes his book is the quality of the mind at work, the sharpness of the analysis, the style. O'Toole even makes you feel sorry for the Brexit leaders and that is no small achievement' Colm T¾ibĒn, Irish Independent, Books of the Year.

'There will not be much political writing in this or any other year that is carried off with such style' The Times.

A TIMES BOOK OF THE YEAR.

'A quite brilliant dissection of the cultural roots of the Brexit narrative' David Miliband.
'Hugely entertaining and engrossing' Roddy Doyle.
'Best book about the English that I've read for ages' Billy Bragg.
'A wildly entertaining but uncomfortable read ... Pitilessly brilliant' Jonathan Coe.

In exploring the answers to the question: 'why did Britain vote leave?', Fintan O'Toole finds himself discovering how trivial journalistic lies became far from trivial national obsessions; how the pose of indifference to truth and historical fact has come to define the style of an entire political elite; how a country that once had colonies is redefining itself as an oppressed nation requiring liberation; the strange gastronomic and political significance of prawn-flavoured crisps, and their role in the rise of Boris Johnson; the dreams of revolutionary deregulation and privatisation that drive Arron Banks, Nigel Farrage and Jacob Rees-Mogg; and the silent rise of English nationalism, the force that dare not speak its name.

He also discusses the fatal attraction of heroic failure, once a self-deprecating cult in a hugely successful empire that could well afford the occasional disaster: the Charge of the Light Brigade, or Franklin lost in the Arctic. Now failure is no longer heroic – it is just failure, and its terrible costs will be paid by the most vulnerable of Brexit's supporters, and by those who may suffer the consequences of a hard border in Ireland and the breakdown of a fragile peace.