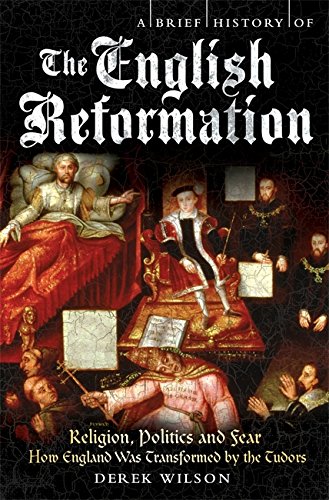 Light wear to cover, pencil marks on front endpaper. Shipped from the U.K. All orders received before 3pm sent that weekday.

"Stimulating and authoritative."--"John Guy""Masterly. [Wilson] has a deep understanding of...characters, reaching out across centuries."--"The Sunday Times"On previous titles: "Fast-paced biography . . . Wilson deftly chronicles Charlemagne's military exploits, political intrigues, and religious devotion."--"Publishers Weekly" on "Charlemagne""I cannot praise too highly Derek Wilson's prose style, which is both masterful and lively. He writes with great conviction and a breathtaking attention to the kind of personal detail that makes his books such compelling reading."--Alison Weir on "In the Lion's Court""The ambition of Wilson's plan lies in the fact that he does not offer us six separate studies . . . but presents one complex, rich narrative. . . . This plan is carried out with attractive energy and zest. . . . He has written a useful and stimulating book about [Britain's] most important dynasty."--Antonia Fraser, "Sunday Times" (UK) on "In the Lion's Court""A masterly study."--"Daily Telegraph" (UK) on "Rothschild""An intriguing and compelling story . . . It does justice to the great genius of Holbein and suggests a new way of looking at him."--"Times Literary Supplement" (UK) on "Hans Holbein""Wilson's account . . . is masterly. He has a deep understanding of . . . characters, reaching out across the centuries to touch them as if they were old friends."--"Sunday Times" UK) on "Uncrowned Kings of England""Marvelous material, fluently and expertly retold."--"Daily Telegraph" (UK) on "The Circumnavigators"

Religion, politics and fear: how England was transformed by the Tudors.

The English Reformation was a unique turning point in English history. Derek Wilson retells the story of how the Tudor monarchs transformed English religion and why it still matters today. Recent scholarly research has undermined the traditional view of the Reformation as an event that occurred solely amongst the elite. Wilson now shows that, although the transformation was political and had a huge impact on English identity, on England's relationships with its European neighbours and on the foundations of its empire, it was essentially a revolution from the ground up. By 1600, in just eighty years, England had become a radically different nation in which family, work and politics, as well as religion, were dramatically altered.

'Masterly. [Wilson] has a deep understanding of . . . characters, reaching out across the centuries.' Sunday Times.

A Brief History of the English Reformation

A Brief History of the English Reformation

Brief History of the English Reformation

Brief History of the English Reformation