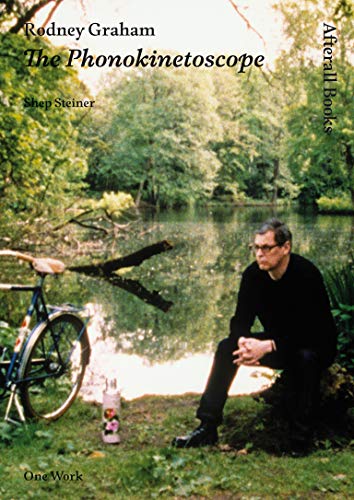 An examination of the complex and subtle world on display in Rodney Graham's film of an LSD-inflected bicycle ride. Rodney Graham's Phonokinetoscope (2001) is a five-minute 16mm film loop in which the artist is seen riding his Fischer Original bicycle through Berlin's Tiergarten while taking LSD, to the soundtrack of a fifteen-minute song (written and performed by Graham) recorded on a vinyl LP. The turntable drives the projection of the film; the film starts when the needle is placed on the record and stops when the needle is taken off. Graham's ride evokes the Swiss scientist Albert Hoffman's famous 1943 bicycle ride home after an experimental dose of LSD as well as Paul Newman's backward-facing ride in Butch Cassidy and the Sundance Kid; the accompanying music presents a thicket of riffs and borrowings. As the images and visual details repeat in the film's endless loop, the artist's Phonokinetoscope refers to a surprising number of works of art and literature, displaying a world rich with subtle meaning. In this illustrated study of Phonokinetoscope, Shep Steiner describes the work as marking Graham's transition into a new medium. Steiner positions Graham's practice in relation to postminimalist practice and that of other artists including Dan Graham, but especially, Ian Wallace and Jeff Wall; considers Graham's rhetoric of playfulness; and finally, beyond the web of references, argues for a notion of allegory and memory theater keyed to the durational work yet satisfying the aesthetic standards of static art. Phonokinetoscope, Steiner argues, looks back to Graham's earlier works focusing on the notion of protocinema and forward to his later musical preoccupations.

Shep Steiner, an art historian and critic, teaches at Emily Carr University of Art and Design, Vancouver. His writing has appeared in C-Magazine, Parachute, Journal of Visual Culture, and other publications.