Kumar, Manjit Quantum: Einstein, Bohr and the Great Debate About the Nature of Reality

Quantum: Einstein, Bohr and the Great Debate About the Nature of Reality 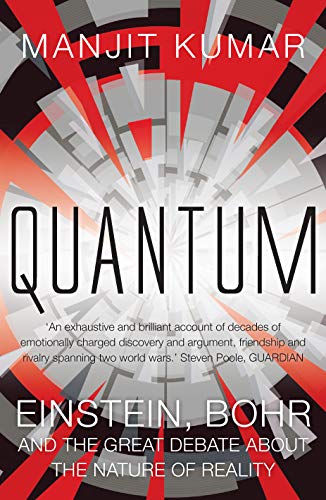 'This is about gob-smacking science at the far end of reason... Take it nice and easy and savour the experience of your mind being blown without recourse to hallucinogens' -- Nicholas Lezard, Guardian 'A super-collider of a book'. -- Independent `...the most important popular science book of the year.' -- Bookseller `Kumar is an accomplished writer... In Quantum he tells the story of the conflict between two of the most powerful intellects of their day: the hugely famous Einstein and the less well-known but just as brilliant Dane, Niels Bohr.' -- Financial Times An exhaustive and brilliant account of decades of emotionally charged discovery and argument, friendship and rivalry spanning two world wars.' -- Steven Poole, Guardian `...it does provide a fresh perspective on the debate.' -- Press Association `A dramatic, powerful and superbly written history.' -- Publishing News `This is not an easy read. There are many concepts that... I could not come to terms with, but this is the biography on an idea and as such read much like a thriller.' -- Ham & High `Quantum is a fascinating, powerful and brilliantly written book that shows one of the most important theories of modern science in the making and discusses its implications for our ideas about the fundamental nature of the world and human knowledge, while presenting intimate and insightful portraits of people who made the science. Highly recommended.' -- Bookbag ``Quantum' is an interesting and informative read.' -- Physics World `That science is a many-splendored, sexy thing is the radiating message that comes out of this fabulous book...a pulsating narrative'. -- Hindustan Times `Probably the most lucid and detailed intellectual history ever written of a body of theory that makes other scientific revolutions look limp-wristed by comparison'. -- Independent `One of the best guides yet to the central conundrums of modern physics.' -- John Banville, The Age, Australia

'This is about gob-smacking science at the far end of reason ... Take it nice and easy and savour the experience of your mind being blown without recourse to hallucinogens' Nicholas Lezard, Guardian For most people, quantum theory is a byword for mysterious, impenetrable science. And yet for many years it was equally baffling for scientists themselves. In this magisterial book, Manjit Kumar gives a dramatic and superbly-written history of this fundamental scientific revolution, and the divisive debate at its core. Quantum theory looks at the very building blocks of our world, the particles and processes without which it could not exist. Yet for 60 years most physicists believed that quantum theory denied the very existence of reality itself. In this tour de force of science history, Manjit Kumar shows how the golden age of physics ignited the greatest intellectual debate of the twentieth century. Quantum theory is weird. In 1905, Albert Einstein suggested that light was a particle, not a wave, defying a century of experiments. Werner Heisenberg's uncertainty principle and Erwin Schrodinger's famous dead-and-alive cat are similarly strange. As Niels Bohr said, if you weren't shocked by quantum theory, you didn't really understand it. While "Quantum" sets the science in the context of the great upheavals of the modern age, Kumar's centrepiece is the conflict between Einstein and Bohr over the nature of reality and the soul of science. 'Bohr brainwashed a whole generation of physicists into believing that the problem had been solved', lamented the Nobel Prize-winning physicist Murray Gell-Mann. But in "Quantum", Kumar brings Einstein back to the centre of the quantum debate. "Quantum" is the essential read for anyone fascinated by this complex and thrilling story and by the band of brilliant men at its heart.

QUANTUM : EINSTEIN, BOHR AND THE