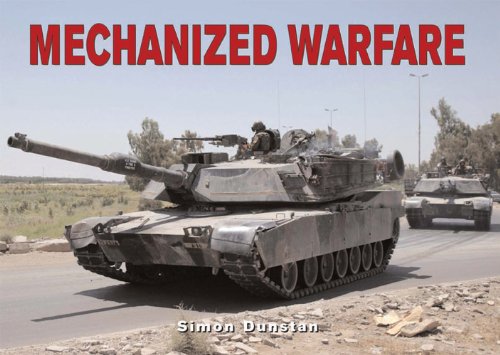 For centuries land warfare was dominated by foot soldiers and horsemen: from Alexander the Greats army to Napoleon's, mobility and speed were functions of physical endurance for men and horses. Steam power brought a major change. Although it proved an excellent method of moving large numbers of troops quickly, over long distances, as was shown in the American Civil War and World War I, steam power did not prove to be viable on the battlefield itself. The development of the internal combustion engine kick started the mechanization of warfare. On October 19, 1914, British troops moved to the front in London omnibuses requisitioned by the army and during World War I trucks would begin to be used by every army. Tracked vehicles entered combat during the Somme offensive of 1916. And this was the precursor to the more extensive use of armoured fighting vehicles in World War II, the Cold War, and the wars in the Middle East. Mechanized Warfare tells this story from the first armoured cars and lozenge-shaped tanks of World War I, through the developmental 1920s and 1930s, to Blitzkrieg and World War II, when mechanized warfare came of age, even though German successes were backed up by long lines of footsloggers and horses. Full mechanization took place during the Cold War years, when mechanized warfare techniques were developed further on NATO's and the Warsaw Pact's exercise grounds, and on the battlefields of Korea, Vietnam, and in the Middle East. Today's soldiers rarely have to walk to the battlefield: they have armoured taxis to get them to the fight. These armoured personnel carriers have evolved into infantry fighting vehicles, often turreted with heavy support weapons. The tank, hunted by today's helicopters and new-generation antitank guided weapon, is at more risk today, but with new types of armour, improved fire-control systems, and heavier weapons it is still queen of the battlefield

Simon Dunstan is a long-established author with over 50 books to his name. His particular field of expertise is the tactical and technical employment of armoured fighting vehicles since World War II, notably during the Korean, Vietnam and Arab-Israeli wars. As an accomplished photographer and film maker, he has produced numerous military history television documentaries. He lives in London and is married with one son and two daughters.