Verwandte Artikel zu More Than a Carpenter: His Story Might Change Yours

McDowell, Josh; McDowell, Sean More Than a Carpenter: His Story Might Change Yours

More Than a Carpenter: His Story Might Change Yours 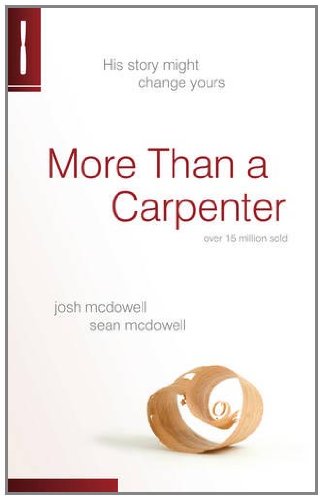 Josh McDowell's timeless examination of the true nature of Christ and his impact on our lives is one of the bestselling Christian books ever (more than eight million copies in print worldwide!) As a college student, Josh McDowell thought Christians must be "out of their minds". He put them down and argued against their faith. But eventually he saw that his arguments wouldn't stand up, that Jesus really was God in human flesh. Josh became a speaker on college and university campuses, challenging those who were just as skeptical as he had been. Here Josh focuses upon the person who changed his life - Jesus Christ. A hard-headed book for people who are sceptical about Jesus' deity, his resurrection, and his claims on their lives. 128 pages, from Living Books.

Josh McDowell is an internationally known speaker, author, and champion of the 'Beyond Belief' Campaign. He is a travelling representative of Campus Crusade for Christ speaking to more than ten million people in at least 84 countries, including 700 university and college campuses. Josh has authored or co-authored more than 90 books, including the classic A Ready Defense, Evidence that Demands a Verdict and Answers to Tough Questions A popular speaker at schools, churches, and conferences, focuses on helping young people think critically about key moral issues. He is a highschool teacher, holds advanced degrees in philosophy and theology, and has compiled Josh McDowell's Youth Ministry Handbook and authored Ethix: Being Bold in a Whatever World and co-authored Understanding Intelligent Design along with William A. Dembski and The Credible Resurrection with Josh McDowell (Gospel Light, 2008). He is currently the general editor for The Apologetics Study Bible for Teens. Sean has also contributed to YouthWorker Journal, Decision Magazine, the Christian Research Journal, and writes regular columns for www.planetwisdom.com and www.christianworldviewnetwork.com.

More Than a Carpenter : His Story Might Change Yours

More Than a Carpenter

More Than a Carpenter: His Story Might Change Yours (Paperback)

Buchbeschreibung Paperback. Zustand: New. Language: English. Brand new Book. Josh McDowell's examination of the true nature of Christ and his impact on our lives is a modern classic, having sold over 15 million copies. Now updated and revised with his son Sean McDowell, it has new content that addresses questions raised by today's popular atheist writers. Written by a skeptic turned believer, More Than a Carpenter challenges readers to ask the question, 'Who is Jesus?' Author and renowned speaker Josh McDowell acknowledges that while the topic of God is widely accepted, the name of Jesus often causes irritation. 'Why don't the names of Buddha, Mohammed, Confucius offend people? The reason is that these others didn't claim to be God, but Jesus did.' By addressing questions about scientific and historical evidence, the validity of the Bible, and proofs of the resurrection, the authors help the reader come to an informed and intelligent decision about whether Jesus was a liar, a lunatic, or the Lord. Content Benefits: The inspirational classic is now updated for a new generation with a fresh look, revised material, and a new chapter that addresses questions commonly raised today. Josh McDowell is joined by his son Sean as they examine the evidence about Jesus. It will allow you to examine the evidence so you can make an informed decision about Jesus for yourself. Josh McDowell's timeless examination of the true nature of Christ and his impact on our lives is a bestselling modern day classic Josh McDowell was a sceptic himself until he examined the evidence, so this book meets readers where they are Author is a well known and respected apologist and bestselling author of many books Examines the evidence so readers can make their own mind up about Jesus Updated to include objections to Jesus raised by the new atheist writers In an easy to read style, this looks at questions such as is the Bible historically reliable, did Jesus really rise from the dead, and how does Jesus impact lives today Ideal book to give to someone who wants to find out more about Jesus Great resource to help you talk about Jesus with confidence to others and understand the basis for the Christian faith Value price point makes this perfect for outreach opportunities Binding - Paperback Pages - 192 Publisher - Authentic Media. Bestandsnummer des Verkäufers AAJ9781850788461

More Than a Carpenter: His Story Night Change Yours

More Than a Carpenter: His Story Might Change Yours

Buchbeschreibung Paperback / softback. Zustand: New. New copy - Usually dispatched within 4 working days. More than a Carpenter offers arguments for faith from a sceptic turned believer and is ideal for giving to people who have questions about the claims of Christ. Bestandsnummer des Verkäufers B9781850788461

More Than a Carpenter : His Story Might Change Yours