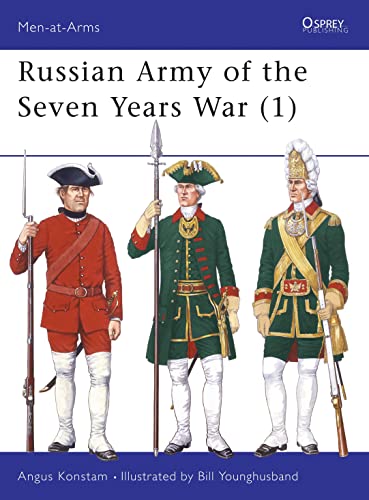 During the long and costly conflict known as the Great Northern War [1700-1721], Peter the Great and his newly formed Russian army, which was modelled on western European lines, defeated their Swedish counterparts, who were generally regarded as being the finest troops in Europe. Angus Konstam examines the development, equipment and organisation of the Russian army following the death of Peter the Great, and describes its emergence from three decades of experimentation and political involvement as a major military power during the Seven Years War. This first of two volumes covers the Russian infantry, with its companion, Men-at-Arms 298, focusing on the cavalry.

Angus Konstam has written several books for Osprey, mainly on 18th century subjects. His recent works include Campaign 44 Pavia 1525 and Elite 67 Pirates 1660-1730. Angus previously worked as a Curator of Weapons at the Royal Armouries, Tower of London, and Chief Curator of the Mel Fisher Maritime Museum. He now devotes himself to full-time writing, indulging his passion for maritime and naval history to the maximum. Bill Younghusband was born in 1936. He was educated in Devon and studied at Newton Abbot College of Art. He has been interested in all things military since childhood, and this interest was compounded through the reading of authors such as G.A. Henty. In 1954 he joined the Life Guards and saw service in Egypt and Cyprus. Bill is a respected military illustrator of more than 15 years experience, and has illustrated many Osprey books including Men-at-Arms 299 Austrian Auxiliary Troops 1792-1816 and Campaigns 48 Salamanca 1812 and 59 Vittoria 1813. He is married with one daughter and currently lives in Ireland.