Secret War In Shanghai: Treachery, Subversion and collaboration in the Second World War 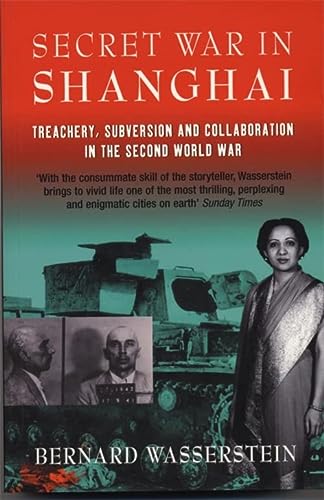 'His cool accounts...are as enjoyable as they are admirable for their research (Daily Telegraph)

'Reveals for the first time that British police and businessmen collaborated extensively with the enemy...(and)...helped fuel the Japanese war effort (Daily Express)

With the consummate skill of the storyteller, Wasserstein brings to vivid life one of the most thrilling, perplexing and enigmatic cities on earth (Sunday Times)

With extensive research and the consummate skill of the sotryteller, Wasserstein brings to vivid life a unique period of modern history contained within just 18 square miles of what was - and still is - one of the most thrilling, perplexing and enigmatic cities on earth. (Martin Booth The Sunday Times)

Wasserstein knows a bad hat when he sees one. His cool accounts of such colourful Shanghai criminals as One-Arm Sutton, Peg-Leg Kearney, "Princess" Sumaire and "Captain" Pick are as enjoyable as they are admirable for their research... (Alan Judd Daily Telegraph)

What a fascinating place Shanghai must have been before the Second World War. Some of the best-known spies in history operated there, and they had one thing in common - they were all determined to make as much money as they could and enjoy their drunken lives to the full. . . a scholarly reconstruction of seedy times in an exciting city (Phillip Knightley Mail on Sunday)

With its lurid vice, savage violence and conspiratorial atmosphere, no place on earth in the 1930s and 1940s better exemplified the twilight zone between politics and criminality than China's largest, most cosmopolitan and most dangerous city. Shanghai before the Second World War was an extraordinary place. Civil war raged among Chinese political factions and criminal gangs. Intelligence organizations, police forces and para-military units of many nationalities vied with one another, sold secrets and engaged in a brutal struggle for supremacy in the Far East. In Shanghai espionage, subversion, propaganda and crime came together in a lethal concoction. After Japan invaded China in 1937, the secret war intensified. Bernard Wasserstein has uncovered startling new evidence from intelligence archives in half a dozen countries. He shows how Allied and Axis agents battled one another in this oriental cockpit. He also reveals the extent of collaboration with the Japanese by British, American and Australian nationals. This book untangles a remarkable history of complicity, duplicity and betrayal -- as well as occasional heroism.

Secret War In Shanghai: Treachery, Subversion and collaboration in the Second World War