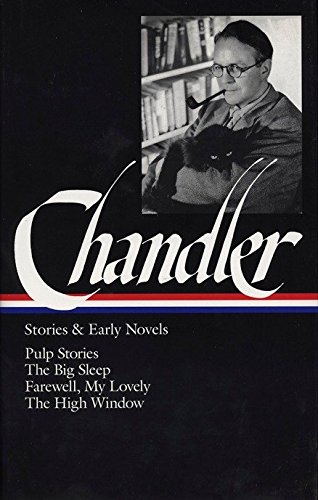 In Raymond Chandler’s hands, the pulp crime story became a haunting mystery of power and corruption, set against a modern cityscape both lyrical and violent. Now Chandler joins the authoritative Library of America series in a comprehensive two-volume set displaying all the facets of his brilliant talent.

In his first novel, The Big Sleep (1939), the classic private eye finds his full-fledged form as Philip Marlowe: at once tough, independent, brash, disillusioned, and sensitive—and man of weary honor threading his way (in Chandler’s phrase) “down these mean streets” among blackmailers, pornographers, and murderers for hire.

In Farewell, My Lovely (1940), Chandler’s personal favorite among his novels, Marlowe’s search for a missing woman leads him from shanties and honky-tonks to the highest reaches of power, encountering an array of richly drawn characters. The High Window (1942), about a rare coin that becomes a catalyst by which a hushed-up crime comes back to haunt a wealthy family, is partly a humorous burlesque of pulp fiction. All three novels show Chandler at a peak of verbal inventiveness and storytelling drive

Stories and Early Novels also includes every classic noir story from the 1930s that Chandler did not later incorporate into a novel—thirteen in all, among them such classics as “Red Wind,” “Finger Man,” The King in Yellow," and “Trouble Is My Business.” Drawn from the pages of Black Mask and Dime Detective, these stories show how Chandler adapted the violent conventions of the pulp magazine—with their brisk exposition and rapid-fire dialogue—to his own emerging vision of twentieth-century America.

Stories and Early Novels includes every story that Chandler did not later incorporate into a novel - thirteen in all. Drawn from the pages of Black Mask and Dime Detective, these stories show how Chandler adapted the violent conventions of the pulp magazines - with their brisk exposition and rapid-fire dialogue - to his own emerging vision of 20th-century America. Raymond Chandler: Stories and Early Novels contains a newly researched chronology of Chandler's life, explanatory notes, and an essay on the texts.