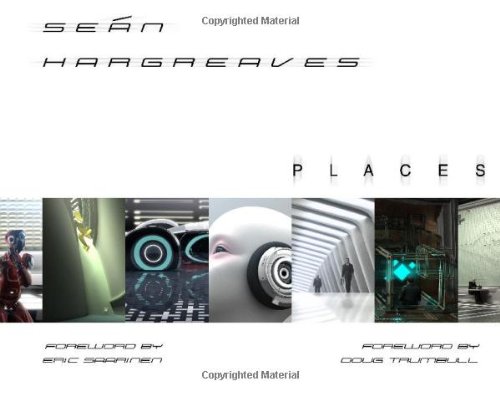 Sean Hargreaves was born in Lancashire, England to an engineer father and artistic mother. He lived in the green countryside of Northern England until his mid-teens and then moved to the US with his family. Hargreaves excelled in the field of Industrial Design and graduated with a Bachelor of Science Degree from Art Center College of Design in Pasadena.

In the early nineties, Hargreaves was hired as a concept artist on The Fifth Element, working alongside famed fantasy artist Jean "Moebius" Giraud. During this time in Paris, Hargreaves' appreciation and understanding of Architecture skyrocketed and subsequently influenced his work to this day; he soon developed an almost photorealistic style of illustration using multiple media expertly.

After returning from Paris, Hargreaves worked on a number of large feature films with well know directors such as SEVEN with David Fincher, G.I. JANE with Ridley Scott, HEAT with Michael Mann and JURASSIC PARK with Steven Spielberg. He also art directed a series of music videos and commercials at this time. In the late nineties, Hargreaves went to work at George Lucas' Industrial Light and Magic.

Hargreaves has twice won the AICP award for production design in commercials. His work is included in the permanent collection of the Museum of Modern Art, New York. He has been nominated three times for the Art Directors Guild Award for excellence in production design. His work was also featured in the exhibition, "PIXAR: 20 years of animation" at the Museum of Modern Art, New York, as well in the books Concept Design 2, The Making of Jurassic Park: the Lost World and Cinefex, to name a few.

Hargreaves currently lives in Los Angeles, CA and works as a production designer in the entertainment industry and as a freelance design consultant.

Buchbeschreibung Hardback. Zustand: New. Language: English. Brand new Book. Sean Hargreaves believes that for artists and designers, images are born from the experiences one observes during the first 10-15 years of their lives. Those images are subconsciously refined over and over in one's life. They may consist of shapes, or places, or films.but they always stay present in the back of the memory and now and then they make an appearance in an image or design that is created. Two important images that stand out for Hargreaves from his youth are the modern house in the green countryside of Northern England that his father built and furnished with prominent mid-century pieces and the machines that he saw when he accompanied his father on business visits to factories; both are extremely prevalent in the artwork throughout these captivating pages. Hargreaves states that designers are taught that sketching is an important part of the design process. The final image is the presentation of the refinement of all the sketches. When the final image is presented, it is usually presented with all the sketches that led up to the final design. Though Hargreaves agrees with this approach to a certain degree, he also questions it, feeling that there are "filtering" issues when sketching; the sketches that follow the initial idea may be refining it but it also "waters down" the initial design. As a result, the final design may end up being a mere long lost relative of the initial idea. The designs in this book started out as an exercise Hargreaves laid out for himself to counter what he learned, he wanted to create designs without any preconceived sketches, he wanted to design as he was designing. The results of his exercise are contained within the pages of this amazing book. Covering every aspect from the vase in the corner of a room, to the cityscape that contains the building that contains the room with the vase that holds the flower, Hargreaves has created places beyond our imaginations yet firmly rooted them in reality. Unbelievable to most, no photographs were used when making these stunning places, space was designed digitally and directly. Bestandsnummer des Verkäufers AAC9781933492599