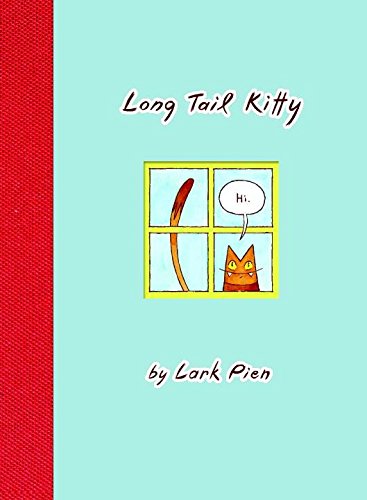 Lark Pien's clever, precise, unique comics are favorites with graphic-novel fans, and Long Tail Kitty marks her debut in the children's-book world. Meet Long Tail Kitty and his friends and neighbors: a bee who's friends with the flowers (at least the nice ones); Good Tall Mouse, who likes ice skating; and a family of aliens who drop in for one night of fun. The warmth and visual wit of these stories are sure to win over young readers, who will want to return again and again to Long Tail Kitty's house, by the hill, by the meadow, by the lake, by the river, by the town, by the bridge on the street where he lives.

Lark Pien: Lark Pien was a comics-obsessed kid—especially Peanuts, Old Master Q, and Uncanny X-men. She carried her fandom into formal training in both art and architecture. As Lark became more adept at creating her own handmade mini-comics, she decided to make art and illustration her full-time profession. Since then, she made her debut with Long Tail Kitty, was proclaimed a Best New Talent and won the Harvey Award for her coloring work on Gene Luen Yang's Printz-winning American Born Chinese. The San Francisco Cartoon Art Museum and other fine arts museums have featured Lark's collected works.