Verwandte Artikel zu The Curious Case of the Chinese Chest

McDermott, Samantha The Curious Case of the Chinese Chest

The Curious Case of the Chinese Chest 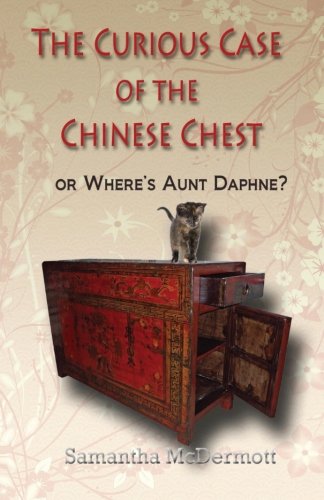 The Curious Case of the Chinese Chest by Samantha McDermott is a romantic novel wrapped in a crime mystery sprinkled with sarcastic humor and family secrets. When Cindy, the star of the book's ensemble cast, happens across a burglar in her home, she finds herself suddenly sucked into a treasure hunt for her aunt Daphne's prized possessions. This story can jump from funny to deadly serious in a turn of a page.

Samantha McDermott was born in Geneva, Illinois on November 4 in the year of the rabbit. She has also lived in Arizona, New York, Massachusetts, Virginia, Maryland, D.C., California, Oregon, France and North Carolina--in that order. She hates cold weather and has always wanted to live on an island off the coast of Maine. Her various jobs and occupations were not interesting even to her and she was there. She is now settled in North Carolina with a husband she adores, three peculiar cats, a bullfrog and an elusive box turtle. Her best friends include an astrologer, an artist, a Sicilian waif, and a 124-lb German bodybuilder. Samantha offers readers simple escapism. “My goal is to steer clear of social relevancy,” she says. “I hope my book’s’ appeal is lighthearted wit and charm.”