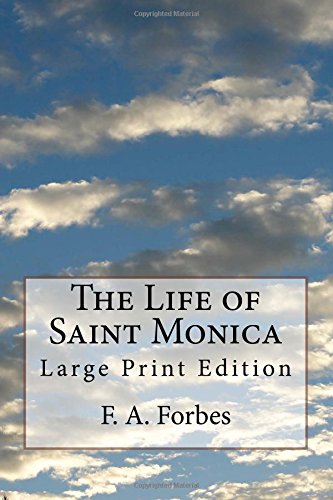 Buchbeschreibung Paperback. Zustand: New. Large Print. Language: English. Brand new Book. This book is above all things the story of a mother. But it is also the story of a noble woman-a woman who was truly great, for the reason that she never sought to be so. Because she understood the sphere in which a woman's work in the world must usually lie, and led her life truly along the lines that God had laid down for her; because she suffered bravely, forgot herself for others, and remained faithful to her noble ideals, she ruled as a queen amongst those with whom her life was cast. Her influence was great and far-reaching, but she herself was the last to suspect it, the last to desire it, and that was perhaps the secret of its greatness. The type is rare at the present day, but, thank God! There are Monicas still in the world. If there were more, the world would be a better place. Excerpt: CHAPTER I HOW ST. MONICA WAS BROUGHT UP BY CHRISTIAN PARENTS IN THE CITY OF TAGASTE On the sunny northern coast of Africa in the country which we now call Algeria stood, in the early days of Christianity, a city called Tagaste. Not far distant lay the field of Zarna, where the glory of Hannibal had perished for ever. But Rome had long since avenged the sufferings of her bitter struggle with Carthage. It was the ambition of Roman Africa, as the new colony had been called by its conquerors, to be, if possible, more Roman than Rome. Every town had its baths, its theatre, its circus, its temples, its aqueducts. It was forbidden even to exiles as a place of refuge-too much like home, said the authorities. It was about the middle of the fourth century. The Church was coming forth from her long imprisonment into the light of day. The successor of Constantine, in name a Christian, sat on the Imperial throne. The old struggle with paganism, which had lasted for four hundred years, was nearly at an end, but new dangers assailed the Christian world. Men had found that it was easier to twist the truth than to deny it, and heresy and schism were abroad. In the atrium or outer court of a villa on the outskirts of Tagaste an old woman and a young girl sat together looking out into the dark shadows of the evening, for the hot African sun had sunk not long since behind the Numidian Mountains, and the day had gone out like a lamp. "And the holy Bishop Cyprian?" asked the girl. "They sent him into exile," said the old woman, "for his father had been a Senator, and his family was well known and powerful. At that time they dared not put him to death, though later he, too, shed his blood for Christ. It was God's will that he should remain for many years to strengthen his flock in the trial." "Did you ever see him, grandmother?" asked the girl. "No," said the old woman, "it was before my time; but my mother knew him well. It was when he was a boy in Carthage and still a pagan that the holy martyrs Perpetua and Felicitas suffered with their companions. It was not till years after that he became a Christian, but it may have been their death that sowed the first seed in his heart." "Tell me," said the girl softly. It was an oft-told tale of which she never tired. Her grandmother had lived through those dark days of persecution, and it was the delight of Monica's girlhood to hear her tell the stories of those who had borne witness to the Faith in their own land of Africa. "Perpetua was not much older than you," said the old woman. "She was of noble race and born of a Christian mother, though her father was a pagan. She was married, and had a little infant of a few months' old. When she was called before the tribunal of Hilarion the Roman Governor, all were touched by her youth and beauty. Sacrifice to the gods, ' they said, 'and you shall go free.' 'I am a Christian, ' she answered, and nothing more would she say, press her as they might. "Her old father hastened to her side with the baby, and laid it in her arms. 'Will you leave your infant motherless?' he asked, 'and bring your old father's hairs in sorrow t. Bestandsnummer des Verkõufers APC9781974330614