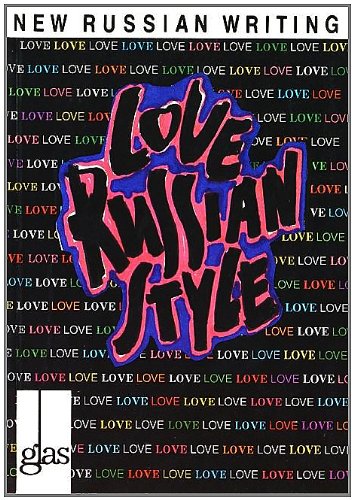 "Love Russian Style approaches its theme from nearly every angle, from careless teenage romps to blood feuds over love long past."
- The Moscow Timesp<> "The standard of writing in GLAS is high and the translations read unusually well."
--The Independent on Sunday

The theme was suggested not primarily by the emerging erotic press in Russia, although that is represented here, nor by the uninhibited writings of the younger generation of Russian writers, some of whom we also present (Ergali Ger, Igor Yarkevich, Sergei Task), but by a story by the 1993 Booker Prize winner Vladimir Makanin about an unmarried woman who carries on an unsatisfactory relationship with a married man, then with two married men both of whom eventually abandon her. The detail of her slow-moving, torturous love affair vividly characterizes the hopeless and humiliating position of the unmarried woman in Russia, no matter how independent and uncomplaining she is trying to be.

There is a highly original treatment of the love theme by Sigizmund Krziszanovsky, a recently rediscovered author of the 1950's who didn't see a single line of his work published in his lifetime but who is now being extensively published all over the world as well as in Russia.

We are proud to present an interesting woman author, Nina Gabrielian, one of the editors of the first Russian feminist almanac Transfiguration and an activist in the fast developing feminist movement in Russia. Women are only just finding their voice, and outstanding women writers of the stature of Petrushevskaya or Tolstaya are still few and far between. Changes for the better in this area are nevertheless very obvious. In subsequent issues we hope increasingly to present new women authors speaking out about their everyday experiences and sharing their views of the world.

The recognized leader of Russian post-moderninsm, Prigov, is a man of many outstanding talents. He is represented here by his poems, drawings, and last but not least, his thoughts on the state of contemporary Russian culture.

There are two essays, on Mayakovsky's love for Lily Brik, and on Nina Berberova's life with the poet Vladislav Khodasevich. Although Glad generally focuses on contemporary authors, we believe that the Silver Age of Russian literature is still so little known, and still holds so many surprises, that even for the Russian reader the work of those returned from the obscurity of the past decades is refreshingly new. This is why we intend to continue acquainting our readers with rediscovered gems, as well as exciting new works by young authors.

Buchbeschreibung Paperback. Zustand: Very Good. The book has been read, but is in excellent condition. Pages are intact and not marred by notes or highlighting. The spine remains undamaged. Bestandsnummer des Verkõufers GOR004212166