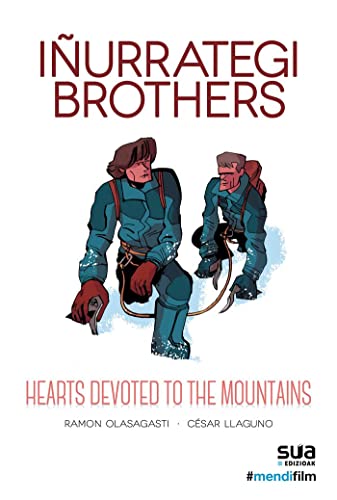 Buchbeschreibung Zustand: New. Llaguno Novales, Cesar (illustrator). The roped team of Felix and Alberto Ińurrategi was unique in the history of Basque mountain climbing: a strong bond, an approach, loyalty towards their team members and sponsors, a gaze that managed to take the mountains in their entirety into consideration. Indeed, mountains are more than just summits, more than anything they are the route, the villages on the way to them, and the people who live in those villages. . . Bi anai (Two brothers) and Bihotz bi (Two hearts) are two great classics in our literature. So are Felix and Alberto, perhaps, insofar as they embodied the equation of the roped team: one is less than one, two makes two and a half. Having climbed Gasherbrum II, their twelfth eight-thousander, together, Felix died in an accident on their way down. The heart of an entire Country was frozen and completely torn apart. ?The day will dawn tomorrow, too,? as Felix often used to say, to boost the morale of anyone who might have faltered, and that approach to life may have been what revived the Country?s pulse. They lived with their hearts devoted to the mountains; Alberto continues that way of life because the mountains gave them courage. Over the years that followed, with the help of the Baltistan Foundation set up after Felix?s death, more difficult summits at a more modest altitude were sought to contribute towards making the way of life of the Baltis in the Hushe valley a little more dignified, among other things. *** Nota: Los envíos a Espańa peninsular, Baleares y Canarias se realizan a través de mensajería urgente. No aceptamos pedidos con destino a Ceuta y Melilla. Bestandsnummer des Verkäufers 20747739