Sonnichsen, Richard Why Don't Men Like Women: A Historical Examination of the Impact of Toxic Masculinity on Women

Why Don't Men Like Women: A Historical Examination of the Impact of Toxic Masculinity on Women 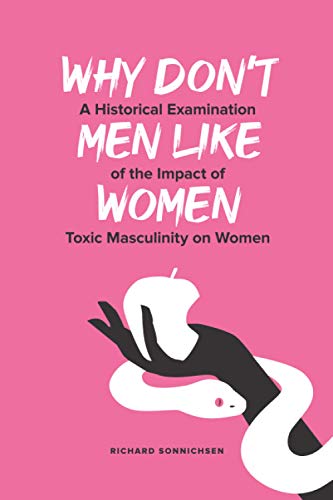 Why Don't Men Like Women: A Historical Examination of the Impact of Toxic Masculinity on Women (Paperback)

Buchbeschreibung Paperback. Zustand: New. Language: English. Brand new Book. "There is not now, nor has there ever been any persuasive justification for men to subjugate women. The profound indignities suffered by women throughout history because of their gender, is morally wrong, inhumane and shameful."With this bold assertion, author Dick Sonnichsen, begins his review and analysis of the historical marginalization of women and the many men who have caused it. He writes, "Unfettered male power has allowed men to assert their wills and maintain an anti-feminine culture in modern society. Their egotistical and destructive behavior toward women is undeserved and unproductive. Men have conveniently become afflicted with amnesic disorder, a learning impairment which manifests itself in the failure to absorb and process new information - such as the discovery that women are insignificantly different from men in their ability to accomplish their ambitions, goals and objectives. Women are capable and deserving of equal treatment with men." Women have essentially lived in a normalized misogynist patriarchy, a condition of emotional bondage stemming from the toxic attitude of a male dominated culture. Beginning with the Agricultural Revolution, Sonnichsen follows the thread of misogyny through to modern times - visiting Aristotle, Saints Paul and Augustine, the age of the witch hunts, and the beginnings of feminism and female emancipation to the modern age of #MeToo. Has the challenge of gender equality been met? Not yet, he concludes, though progress has been made. "Parity among the genders cannot be carried out effectively," he writes, "unless both are represented through the full range of human activities: with each other and with the family, in government, in economic enterprise, in university education, in the religious establishment, and in the artistic and literary worlds. Throughout American history, the rhetoric of individual equality has always been acclaimed but the achievement of this goal has gone wanting. Forging a genuine egalitarian society will require men to respect, acknowledge and appreciate the value of women by helping develop an authentic flowering of equality."Anyone curious about the form and sources of the formidable obstacles faced by women in their quest for equality with men - now and over the centuries - should read this book. Bestandsnummer des Verkäufers APC9798672051741