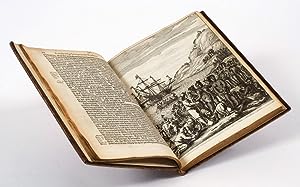 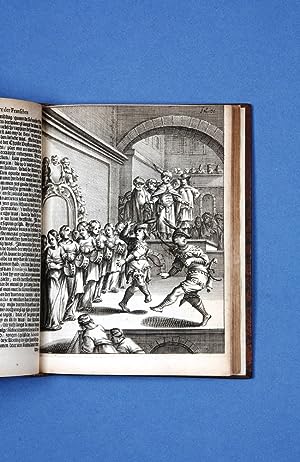 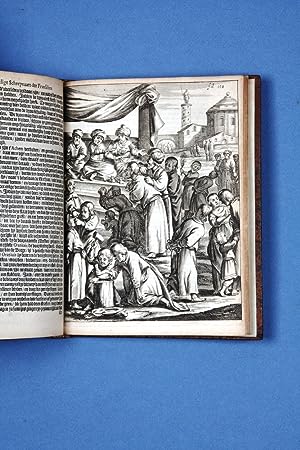 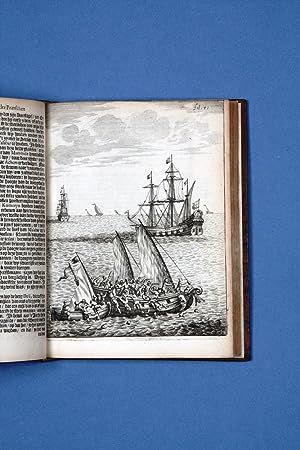 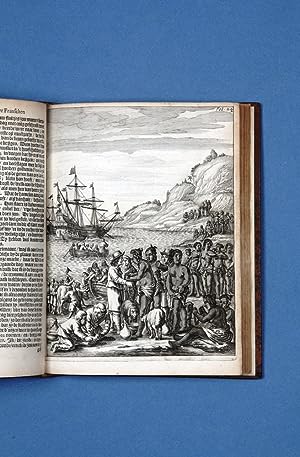 Quarto, with eight engraved plates; bound in later period-style full calf, spine gilt with raised bands, ex libris of Saint Charles de Bourbon seminary on title; First Dutch edition, and rare. This is the only separate appearance and the only illustrated edition of Beaulieu's account of his travels for the fledgling French "Compagnie des Indes Orientales". Beaulieu was a French navigator and coloniser who was appointed in 1619 to command the so-called "Fleet of Montmorency". The three ships sailed to Madagascar and Banda Atjeh via the Cape of Good Hope, but the voyage was not entirely a success, with two of the ships captured by the Dutch, keen to preserve the rights of the VOC. Undaunted, Beaulieu still petitioned for Madagascar to become a roadhouse for voyages to the East Indies, but Richelieu prevaricated, fearing provoking the Dutch. Despite Beaulieu's repeated encouragement, over the following decades Madagascar saw only desultory settlement, much of it from privateers. It was only in 1665 - a few years before the publication of this account - that the first voyage of the Compagnie des Indes Orientales carried settlers to the island; suffering under impossibly harsh conditions, the settlement petered out soon after. These French incursions were not particularly liked by the Dutch, and so it is perhaps not surprising that this Dutch translation focuses on the mishaps and disasters that plagued Beaulieu's voyage (hence rampspoedige, or "catastrophic", in the title). Designed for the Dutch popular market, it was published by the Amsterdam publishers Jan Rieuwertsz and Pieter Arentsz, who produced numerous VOC publications and other voyage accounts. As is often the case with Dutch editions of the seventeenth century, this is a beautifully illustrated book (at a time when most works in English and French often presented rather bare text). Three of the plates are wonderful depictions of ships in distress at sea, including an extraordinary image of a French ship on fire at night. Perhaps the most striking plate, however, is the scene as the French vessels first arrive in the Bay of St Augustin, showing the mariners hastening ashore to trade beads for livestock. This is the best early edition of Beaulieu's voyage, only preceded by the chapter in the second volume of Thévenot's Relation de divers voyages curieux (1664). The only earlier account of the voyage of the Fleet of Montmorency appears to be the impossibly rare Voyage faict aux Indes Orientalles by Jean Le Telier, one of Beaulieu's fellow captains. As a manuscript note and library stamp on the title-page attests, the book was donated to the library of the St Charles Borromeo Seminary in Philadelphia by one Dr Gilbert in 1876. A few scattered signs of age, a very handsome copy. Buchnummer des Verkäufers 3602388

Hordern House Rare Books is a leading international antiquarian dealer specializing in voyages and travels, colour plate books including natural history; early Australian paintings and prints, voyage art, historical maps and manuscripts. Hordern House issue regular catalogues and exhibit at Fairs in Australia, Asia, Europe and America. Our business is in the heart of Surry Hills, five minutes from the centre of Sydney. We occupy an entire floor of a converted warehouse where we have created a customised environment for our work and the display of rare books, manuscripts & paintings.


We guarantee the condition of every book as it's described on the Abebooks web
sites. If you're dissatisfied with your purchase (Incorrect Book/Not as
Described/Damaged) or if the order hasn't arrived, you're eligible for a refund
within 30 days of the estimated delivery date. If you've changed your mind about a book that you've ordered, please use the Ask bookseller a question link to contact us and we'll respond within 2 business days.