Verwandte Artikel zu Super You: How Technology is Revolutionizing What It...

Walker, Andy Edward; Svela, Kay; Carruthers, Sean Super You: How Technology is Revolutionizing What It Means to Be Human

Super You: How Technology is Revolutionizing What It Means to Be Human 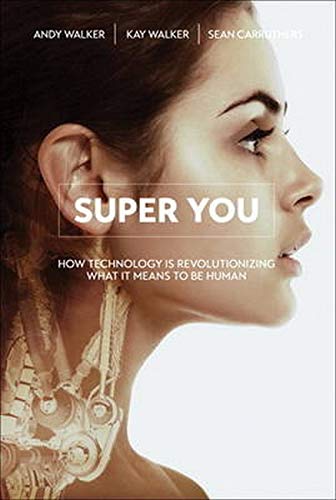 Rewind Your Biology and Live Like a 20-Year-Old! Edit Your Genes to Live Disease-Free! Find a Parking Space with Your Internet-Connected Brain! Advances in longevity, genetics, nanotech, and robotics will make all this possible! This is not science fiction. This is your future. Right now, pioneering scientists and technologists are transforming what it means to be human by overcoming biological limits that have existed since our ancestors swung out of the trees...and into the suburbs. With incredible inspiration and perseverance, these visionaries are solving deep problems of human health and longevity-and their progress is accelerating. Super You takes you inside their labs, companies, and minds...to show how you can reap the benefits of a stronger, longer, better, life. You'll learn how to start hacking your life today, to become more super, every day. Discover what's possible when yesterday's human limits are gone! Learn how evolution became obsolete-and why it's time to start hacking yourself Save your life with whirring "jet engine" hearts, printed organs, and other medical miracles Rewire and turbo-boost your ape brain Become a mega-mind by connecting your brain directly to the Internet to use Google's synthetic neocortex Become superhuman with cyborg technology Design and mold your looks Genetically engineer your baby to be a tennis star (and other true stories) Prepare for the political and religious backlash against the future Discover how scientists will make death obsolete by treating it like a curable disease-and how to live until they do

Andy Walker has had a long career as one of North America's top technology journalists. In the last two decades, he has written about consumer technology for dozens of national newspapers, magazines, and websites. His personal technology advice column was syndicated across Canada and today his body of work is published at technologytips.com where more than 50 million unique visitors have read the advice over the last decade. Super You is his fifth book (he has written four with Pearson Education). Andy was also a cohost on the internationally syndicated TV show Call for Help with Leo Laporte on G4TechTV as well as writer and host of several spinoff shows. He has also worked with some of the top luminaries in technology publishing. Between 2002 and 2004, Andy was the executive editor of Berkeley-based Dig_iT magazine, a publication focused on the digital lifestyle. It was founded by David Bunnell and Fred Davis, the publishing pioneers behind PC magazine, PC World, MacUser, and MacWorld. Walker has a passion for technology literacy. He created the Canadian charity Little Geeks, which gives computers to children and families in need. He is also a recipient of the Queen Elizabeth II's Diamond Jubilee Medal for his work in technology literacy and digital publishing. Andy was a pioneer in video podcasting with the hit Internet show Lab Rats, which he cocreated with Super You coauthor Sean Carruthers, and can also be seen and heard regularly across the dial on national radio and television commenting on emerging technology trends. He has also had consulting roles on content and business development projects for Microsoft, Yahoo!, and Canadian Press Enterprises. Andy was born in the UK, educated and raised in Canada, and now lives in Tampa, Florida, with Kay, his wife and coauthor, and Carter, their first child. They also run Cyberwalker Digital (Cyberwalker.com), an online marketing agency. You can reach Andy, and learn more about him and his coauthors at readsuperyou.com. Kay Walker is a life hacker. She teaches people noninvasive tools-neuroplasticity exercises, emotional IQ skills, and personal development tactics-they can use to access their full potential and overcome their biological limitations that hold them back from living a life they love. She's the creator of AwesomeLifeClub.com, an exclusive club for individuals who want to learn tangible tools they can use to become super performers in all areas of life. Walker is well known for her advocacy work in the mental health field. She runs a resource site Depression Zone (http://depression.zone) where she provides online support, books, courses, and private coaching services for people suffering from depression. She's also married to coauthor Andy Walker. It's not the first project the two have collaborated on. They run a digital marketing agency, Cyberwalker Digital (based in Tampa, Florida) where they teach businesses and entrepreneurs how to strategically market their businesses on the Internet. Though she's well-versed in digital marketing, Kay is the least "techie" of the three authors. She helped refine Super You into a book for a mainstream audience. She also brings a female perspective to some of the more gender-specific topics covered in the book, such as designer babies and cosmetic surgery. Sean Carruthers has been writing, podcasting, and broadcasting about technology for nearly two decades. Sean was a content producer on the G4TechTV programs The Lab with Leo Laporte, Gadgets and Gizmos, Torrent, and Call For Help. He was also one of the early pioneers in the world of video podcasting, where he cocreated, cohosted, and edited the long-running technology program Lab Rats with coauthor Andy Walker. He served as the Test Lab Editor for The Computer Paper and HUB: Digital Living magazine, where he was always up to his eyebrows in the hottest new technology. His writing has been featured in The Globe and Mail, the Village Voice, allmusic.com, ITWorld Canada, and various other technology and music publications. He has also produced audio and video content for various outlets, including CBC Radio's program Spark. Currently, Sean is the manager of the custom video department of The Canadian Press Enterprises Pagemasters North America subsidiary, where he has overseen the production of nearly ten thousand videos.

1. Super You: How Technology is Revolutionizing What It Means to Be Human

2. Super You: How Technology is Revolutionizing What It Means to Be Human

3. Super You: How Technology Is Revolutionizing What It Means to Be Human

4. Super You: How Technology is Revolutionizing What It Means to Be Human